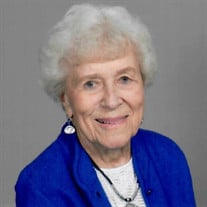 Frances “Louise” (Kelly) Pumpelly, age 89, passed away on January 26, 2020, with family by her side. Louise lived a full life and was never too old to try something new. Born in Lebanon, Kentucky, on September 20, 1930, Louise graduated from Sweet Briar College in 1952 and moved to Louisville. On March 20, 1954, she married Robert (Pump) Pumpelly, and together they raised three children and enjoyed 46 years of marriage. Later in life, Louise married Joe Anderson (now deceased). His family remained a loving part of her life until the very end. Creative and industrious, Louise was never one to sit idle. She was an accomplished seamstress, an excellent cook, and a role model for healthy habits (except for that sweet tooth). She was a tireless volunteer her entire life--delivering meals on wheels, helping build Habitat houses, and serving in countless ways as a devoted member of Harvey Browne Church. Well into her 80s, her daily calendar continued to be jam packed with a week’s worth of activities. Ever the competitor, Louise had a passion for games—and winning. The last of her foursome to give up tennis, she went on to practice qi gong, play on a dart ball team, and walk a half marathon at the age of 81 (the oldest and fastest in her age bracket, of course). She was an avid bridge player and a lover of all games involving words, from Scrabble to crossword puzzles to Jeopardy. That she was a UK basketball fan goes without saying. (Go Big Blue!) Louise loved her friends, nurturing friendships from long ago while making new friends until the day she died. The steady stream of visitors, cards, and notes in the last year, when she was unable to be about on her own, was a testimony to how many counted her as a friend. No matter the hand she was dealt, especially in the last year of her life, Louise remained positive and uncomplaining, always doing her best to find the bright spot in a difficult situation and battle back. She amazed us all. Louise was preceded in death by her first husband Pump, sister Margaret, brother George, nephew David, and second husband Joe Anderson. She is survived by her three children, Ellen (Robbie), Bob, and Ann (Joe); six grandchildren: Adam, Paul (Elaine), Benjamin (Grace Ann), Thomas, Kate, and Michael; one great grandchild, Aria; many nieces and nephews; the family of Joe Anderson; and many, many friends. Visitation will be held from 4 to 7 pm at Pearson’s, 149 Breckenridge Lane, on Monday, February 3. A memorial service will be held at 10:30 on Tuesday, February 4, at Harvey Browne Memorial Church, 311 Browns Lane, with a reception to follow. Expressions of sympathy may be made to Harvey Browne Church or Hosparus. The family would like to give special thanks to the many loving caregivers who became a part of our family this past year. You know who you are.

The family of Frances "Louise" (Kelly) Pumpelly created this Life Tributes page to make it easy to share your memories.

Send flowers to the Pumpelly family.