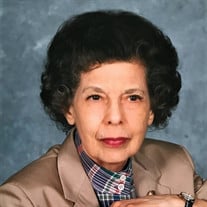 Eve “Evie” McKulick passed away peacefully on May 6, 2020, at the age of 95, at Lincoln Hills Health Center in New Albany, Indiana. Born January 26, 1925 in New York City, she was the only daughter of Herman and Evelyn Weiss. She is survived by her children: Greg (Kathy) of Pueblo West, Colorado; Ron (Mary) of New Albany, Indiana; and Patricia Grove (Ed) of Louisville, Kentucky; and her grand-daughter, Lisa Newbanks, and great grandchildren, David and Sarah Newbanks. Her husband, Erwin (Mac), passed away in March 2012. Eve McKulick grew up in Brooklyn, New York, and graduated from High School in 1943. She married Mac the day after “D-Day”; June 7, 1944. On June 8th, Mac, a Navy photographer, shipped out to the Phillipines. After the war, they eventually moved to Cincinnati, following Mac’s career in the Photo-Gravure Field, and then settled in Louisville, Kentucky, in 1950. Eve worked for many years as a legal secretary with various law firms in Louisville. She deeply loved her family. She gave her best for her kids and family, being Mom and wife while working full time. She and Mac quietly loved this country. She helped to support various Veteran organizations over many years. World War II influenced Eve and Mac in heartfelt ways throughout their lives. Eve was full of energy and held to a “back East”, Yankee spirit and toughness. She was dedicated to health and nutrition. She and Mac loved spending time on the Gulf coast of Florida. They loved art and film, and time at Bernheim forest. Eve did love to shop. She enjoyed going for evening walks and ‘getting a breath of fresh air’. She was prayerful and held to a deep relationship with God and her church (Calvin Presbyterian). She always strove to be as good as she could be. As she journeys in the great beyond, those that know her know she will have a happy abundance of lemons, honey, and apple cider vinegar; she believed in the natural way. There is not a funeral visitation. She will be buried with a graveside service at Kentucky Veterans Cemetery Central; Radcliffe, Kentucky. In light of this funeral arrangement, please make a donation to a Veterans organization in Eve McKulick’s name. She would love that.

The family of Eve McKulick created this Life Tributes page to make it easy to share your memories.

Send flowers to the McKulick family.