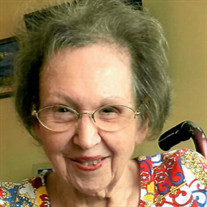 Eva “Grace” Hall Kleinschmidt, 96, of Louisville, died peacefully on March 25, 2022 at Jefferson Place following a lengthy decline from Parkinson’s disease. She was born on July 17, 1925 in Greenville County, South Carolina to the late William Barksdale and Marie T. Hall. She is survived by her only sibling, Roger Hall, of Simpsonville, SC. After graduating from high school in 1942, she attended Furman University where she graduated with a bachelor’s degree in Education in May 1946. While she was in college, she met Frederick (“Fred”) William Kleinschmidt at a church social. He was serving in the Army Air Corps in Greenville, SC. They married on June 12, 1946 and moved to Louisville, where they spent 68 years of marriage together until his death in 2014. Grace began teaching at the former Nicholas Finzer Elementary School on Broadway where she remained until they made the decision to start a family. Fred and Grace provided a loving home to their two children, Bruce Kleinschmidt and Ann K. Bowling (Roy). During her years at home with her young children, Grace began her Master’s in Education at the University of Louisville. She graduated in 1963 and resumed teaching full time. She taught at Stiver’s Elementary for many years in addition to being a devoted wife and mother. She was constantly furthering her education and she subsequently became a reading specialist in the Jefferson County Public Schools. After retirement, she continued to tutor and remained actively involved in causes pertaining to education. She was an active member of Delta Kappa Gamma, XI chapter, an international society for key women educators, which she joined in May 1980. Following retirement, Grace enjoyed volunteering at the Kentucky Science Center where she was highly regarded. Grace particularly enjoyed working in church education and mission programs and made several trips to the Yucatan to work in church schools. She was always an avid traveler. The family took extensive car trips every summer in addition to return visits to SC. She took her children to Europe in 1970 and made sure that she and Fred returned as often as possible. Grace was actively engaged in family history and was extremely proud to be a member of the John Marshall Chapter of the Daughters of the American Revolution. In addition to her two children, Grace’s family grew to include six grandchildren: Dale (Sara), James (Jennifer Kinzel) and Chris (Tracy) Kleinschmidt and Mark (Sarah), Chad (Haley) and Laura Bowling. The families continued to expand with ten great grandchildren: Gregory, Elise, Victoria, Eleanor, Abraham, Amelia and Arthur Kleinschmidt and Emma Grace, Charlotte and Lucy Bowling. Additionally she is survived by three nieces, one nephew and numerous cousins. Grace was an active member of Calvin Presbyterian Church. She was a deacon and then an elder and served in many capacities. She was a woman of faith and integrity. Grace strove to be the woman described in Proverbs 31: 26 “When she speaks, her words are wise, and she gives instructions with kindness. She carefully watches everything in her household and suffers nothing from laziness. Her children stand and bless her. Her husband praises her. There are many virtuous and capable women in the world, but you surpass them all!.” The family would like to thank Alba and Matt along with the other staff members at Jefferson Place Nursing Home who took such good care of Mom. Additionally, the family is deeply grateful to Gayle, Julie, David and Bobbie for their concern and faithful visits to Mom. The funeral will be at Calvin Presbyterian Church, 2501 Rudy Lane, Louisville KY 40207 on Saturday, April 2nd at 11 AM, with a visitation one hour earlier. Interment at Cave Hill Cemetery. Visitation at Pearson’s 149 Breckenridge Lane, Friday, April 1st, from, 4 to 6 PM. Memorial expressions may be made to the Parkinson’s Foundation, 200 SE 1st Street, Ste 800, Miami, FL 33131, or Delta Kappa Gamma, Xi Chapter, Grant in Aid, c/o Barbara Jacobs, 3713 Tuesday Way, Louisville KY 40219 or the Hindman Settlement School, P O Box 844, Hindman KY 41822.

The family of Eva "Grace" Hall Kleinschmidt created this Life Tributes page to make it easy to share your memories.

Send flowers to the Kleinschmidt family.