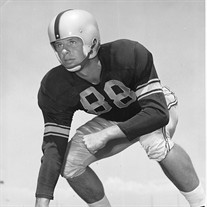 Ernest “Bucky” J. Cutis, Jr., of Louisville, Kentucky, passed away peacefully on October 24, 2019. He was born on March 3, 1929 in Gainesville, Georgia to the late Ernest and Frances Curtis. He will be remembered as a loving father, grandfather, great-grandfather, brother, and friend to many. Bucky was a graduate of the 1947 class of Riverside Military Academy in Gainesville and Vanderbilt University where he shined as a Commodore on the football field. He was a member of SAE Fraternity and ODK Honorary Society. Among his many football accolades, Bucky was the co-captain of the South Team in the Senior Bowl where he was honored as the MVP of the game. He led the nation in several receiving categories in 1950 including a 29.3-yard average per reception, and was selected as an All-American tight end. The team's quarterback was Bill Wade. Curtis was then drafted in the second round of the 1951 NFL draft by the defending NFL champion Cleveland Browns. Curtis made the Browns for the 1951 season, but was drafted for service in the Korean War before the season started. Curtis served his four years in the Navy, expecting to be signed by the Browns for the upcoming 1955 season. When he and the Browns had trouble reaching a contract, he signed with the Toronto Argonauts of the Canadian Football League. He was elected to the Vanderbilt Athletics Hall of Fame in 2010. In his professional life, Bucky served eighteen years as the national marketing manager for International Paper Company, and twenty-four years as the President of Courier Carton. He was a member of St. Francis in the Fields Episcopal Church. Along with his parents, Bucky is preceded in death by his wife of 57 years and Vanderbilt Homecoming Queen, Sally “Peanut” Bradley Curtis and sister Frances Lillian Diefendorf. He is survived by his children, Tucker Curtis (wife Donna), Bibby Poropatich (husband Jim), Bradley Piper, and Nan Curtis (husband Martin Houston); 9 grandchildren, 9 great-grandchildren; and his sister Nancy Curtis Robinson. Memorial service will be held at 3p.m. on Sunday, October 27, 2019 at Pearson’s, 149 Breckenridge Ln.

The family of Ernest "Bucky" Jackson Curtis Jr. created this Life Tributes page to make it easy to share your memories.

Send flowers to the Curtis family.