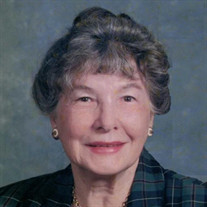 Elsa Taylor Kalmbach, 88, died Friday, April 24, 2020. Born Elsa Storck Taylor in New Orleans, she lived in Louisville for the past 45 years, where she passed away peacefully in her sleep after contracting coronavirus. She was married in an enduring romance for 55 years to James Booth Kalmbach Sr. She grew up in New Orleans, Birmingham and Atlanta. While at Sophie Newcomb College at Tulane University she was president of Kappa Kappa Gamma Sorority, and was a Maid of the 1953 Knights of Momus Mardi Gras Ball. Upon graduation with a bachelor’s degree in fine arts, she taught art at Southfield School in Shreveport, LA. Later, after moving to Louisville, she founded Florabunda Designs, a floral design business she operated passionately for two decades. She volunteered with many organizations, including The Junior League, J.B. Speed Art Museum, Mental Health Association and the Louisville Ballet and Opera Association. She was a member and elder at Second Presbyterian Church, where she also served as archivist. She was the family genealogist. She was an avid member of The Filson Historical Society, The Monday Afternoon Club, The Daughters of the American Revolution, and The National Society of The Colonial Dames of America. She was preceded in death by her husband Jim and her parents, Elsa Storck and Frank Mackey Taylor. She is survived by four sons and daughters-in-law, James Booth Jr. and wife Katherine, Ambrose Storck and wife Emily, Frederick Taylor and wife Susan, and Frank Butler and wife Audra; 10 grandchildren, Taylor and his wife Logan, Franklin, John, Brittany, Rebecca, Alec and his wife Catherine, Erich and his wife Lauren, Anna and her husband Dylan, Eva, and Griffin; and three great-granddaughters, Emily, Korie and Camille. She is also survived by her brother, Frank Howell Taylor. A private graveside service will be held Friday, May 1, at Cave Hill Cemetery. The family will hold a memorial service at a later date. In lieu of flowers, please donate to Kilgore Samaritan Counseling Center, 918 Ormsby Lane, Louisville, KY 40242.

Elsa Taylor Kalmbach, 88, died Friday, April 24, 2020. Born Elsa Storck Taylor in New Orleans, she lived in Louisville for the past 45 years, where she passed away peacefully in her sleep after contracting coronavirus. She was married in an... View Obituary & Service Information

The family of Elsa Taylor Kalmbach created this Life Tributes page to make it easy to share your memories.

Send flowers to the Kalmbach family.