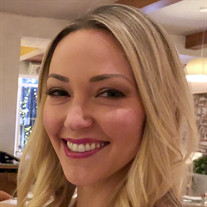 Ellen Catherine Hagans died at home June 17, 2020. Thirty-seven years young, she lived a very active, adventurous life of her own design. Ellen is survived by her mother Judy Jones Johnston and stepfather Philip Johnston of Louisville, KY; her father Frank Hagans and stepmother Donna Hagans of Fisherville, KY; her brother Evan Hagans, Louisville, KY; aunt and uncle Cathy Jones Nelson (Gary), Boise, ID; great-uncle Kenneth Hagans, Louisville, KY; cousins Billie Jones (Liz), Pacific Palisades, CA; Josh Hagans (Danielle), Louisville, KY; Leah Glasscock, Louisville, KY; Kevin Glasscock (Kristy), Louisville, KY; Alex Glasscock, Louisville, KY; and, stepsisters Trende Reed (Bobby), Louisville, KY, and Miranda Seewer, Louisville, KY. She was preceded in death by her grandparents Edgar and Catherine Jones, and Eugene and Peggy Hagans; great-aunt Barbara Hagans; uncles David Hagans and Bill Jones; and, aunt and uncle Kathy Hagans Glasscock and Mike Glasscock. Ellen was born October 1982 in Louisville, KY. She attended Manual High School where she played field hockey, and the University of Kentucky where she was a member of Alpha Delta Pi sorority. In 2016 while living in Chicago, Ellen was diagnosed with Glioblastoma Multiforme, an incurable brain cancer. Over the next four years she would undergo two brain surgeries, radiation, chemotherapy, and participate in two clinical trials. During this time, we are grateful to those closest to her for supporting her, loving her and being in her life. They were instrumental in helping her fulfill her zest for travel, adventure and in living her life to its fullest. We will always remember her infectious smile, piercing eyes and caring personality. Her presence in our lives will be deeply missed by all who knew her. When you think of Ellen, celebrate the good memories you have of her. Remember that life is fragile and short, so live it to the fullest. Cremation will take place. Instead of flowers, the family is establishing an endowment for the rescue, care, spay/neuter and adoption of cats and dogs. This was something near and dear to Ellen’s heart. https://gf.me/u/yakvn2 A celebration of Ellen’s life at Hurstbourne Country Club will be announced at a later date. Ellen Catherine Hagans

The family of Ellen Catherine Hagans created this Life Tributes page to make it easy to share your memories.

Send flowers to the Hagans family.