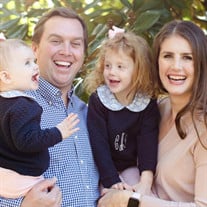 Elizabeth Campbell Moir passed away peacefully on August 27th, 2021 at the age of 32, surrounded by her family. A Louisville native, Elizabeth was born and raised in St. Matthew’s. She attended Sacred Heart Model School, Holy Spirit Catholic School and Sacred Heart Academy. Now a member of the Sacred Heart Valkyrie Hall of Fame, she was a standout basketball player from 2003-2007. She was a member of the 2004 State Championship team, a consensus 1st Team All-State player her senior year, and a 2007 Kentucky All-Star. Elizabeth continued her basketball career at the College of the Holy Cross in Worcester, Massachusetts, where she was named 1st team All-Freshman for the Patriot League in 2008. She transferred her junior year to the University of Kentucky, carrying on her family legacy as a Wildcat, and to be closer to her high school sweetheart, Michael. She continued her basketball career at the club level while at UK, where she helped lead her team to the 2010 NCBBA National Basketball Championship. She graduated with a degree in History in 2011, and moved back to Louisville to begin her career in sales and marketing. Elizabeth joined Strategic Marketing in 2013, where she was beloved by her coworkers and clients, and worked until her passing. Standing at an impressive 6 foot 2 inches, from afar Elizabeth was a gentle giant (except on the basketball court or in any competition). She never met a stranger and had the natural ability to quickly connect with people, and make them feel special even in passing conversation. For those who were lucky enough to get to know her, they quickly learned what a fiercely loving, vibrant person she was. She loved to travel, and was always planning her next trip with family and friends. She had a sense of adventure and a hunger for life experiences that left her little patience to sit in one spot for too long. Elizabeth always made time, no matter how busy she was, to lend an ear or helping hand to anyone in need. Elizabeth’s number one priority in life was her family. She and Michael married in 2014 and welcomed their pride and joy: their girls Campbell (4) and Eleanor (2). Despite her athletic and academic accomplishments, her proudest achievement was being their Mom. Elizabeth was diagnosed with Stage IV ALK+ Lung Cancer in May of 2019. In the two years and three months since her diagnosis, her passionate nature helped make her a powerful voice in raising awareness and fundraising for lung cancer research. As she valiantly fought for her life, she was unwavering. She never hesitated to reach out to those in need, and made many friends worldwide in the lung cancer community. She didn’t lose her battle with cancer, she won her fight triumphantly: vanquishing the disease by living her days with a positive attitude, and in hope and faith. Elizabeth is survived by her husband, Michael; daughters, Campbell and Eleanor; parents, James and Karen Campbell; grandmother, Betty McGuire; sisters, Catherine Meyers (Patrick) and Annamarie Carden (Sam); brother, James Jr (Woody); nephew and godson, Charles Meyers; niece, Frances Meyers; and many beloved uncles, aunts and cousins. Elizabeth is also survived by her beloved coach and mother-in-law, Donna Bender Moir; father-in-law, Rick Moir; Grammy Norma Bender; and sisters-in-law, Megan Flores (Eric), Mackenzie Moir and Meredith Moir. Elizabeth’s visitation will begin at 2:00 p.m. EDT on September 2, 2021 at Pearson’s Funeral Home, 149 Breckenridge Lane in Louisville. Memories will be shared beginning at 7:30 p.m. in the chapel. Funeral mass will begin at 10:00 a.m. EDT on Friday, September 3rd at Holy Spirit Catholic Church, 3345 Lexington Road in Louisville. The funeral will be live-streamed at https://www.facebook.com/holyspirtlouky for those who cannot attend in person. Burial will follow at Calvary Cemetery, 1600 Newburg Road in Louisville. In lieu of flowers, memorial gifts may be made to Sacred Heart Academy (3115 Lexington Road, Louisville KY 40206) for the Elizabeth Campbell Moir ’07 Scholarship Fund, or the Elizabeth Moir Memorial Fund for ALK+ Lung Cancer Research (https://alkpositive.kindful.com/?campaign=1148165).

The family of Elizabeth Campbell Moir created this Life Tributes page to make it easy to share your memories.

Send flowers to the Moir family.