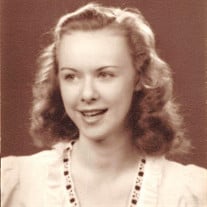 Elizabeth “Billie” Franklin Hoertz, 95, of Louisville, Kentucky passed away on April 21, 2022 at Masonic Home in Louisville, Kentucky. Billie is survived by her husband of 76 years, Charles D. “Bud” Hoertz, Jr. Born December 3rd in Shelbyville, Kentucky to Edward Wallace and Mary Bell Youngman Franklin, she grew up between Shelbyville and Louisville, attending Louisville Girls High School. Billie met Bud during her sophomore year of high school and they never parted. Together they attended the University of Louisville where she was a devoted and proud member of Zeta Tau Alpha sorority. Her love and talent for fashion and beauty started with her early career working in the office of the president of The Stewart Dry Goods Company. She used the knowledge she gained there in later years by teaching classes in style and poise to many Ashland area girls. She and Bud started their family in Louisville but soon after they married, his work took them to Ashland where they lived and raised their family until his retirement from Ashland Oil. After retirement from Ashland, she and Bud vacationed for several years on Longboat Key, Florida and traveled extensively in Europe. In 1999, they returned “home” to Louisville where she enjoyed reuniting with old friends and making many new and wonderful ones. To all who knew her, Billie was a classy, kind spirit full of knowledge and worldly advice. She was preceded in death by her parents, her brother EW “Sonny” Franklin and two sons, David F. Hoertz and Stephen E. Hoertz . She is survived by her children Scott O. Hoertz (Lucy) from Dublin, Ohio, Dr. Stewart Hoertz (Sean Allen) from Louisville, Kentucky and Dr. Mary “Mitzi” Hoertz Henkel (Bill) from Lexington, Kentucky; daughter-in-law Donna Hoertz (Brett McClellen) from Lexington, Kentucky; nine grandchildren, Rachel Hoertz, Charlie Hoertz (Rachel), Fritts and Adeline Baesler, Hannah, Drew, Ben, Tanner and Caroline Hoertz; three great-grandchildren, Bella, Maddie, and Scotty and two brothers John Franklin (Diane) from Louisville, Kentucky and Joe Franklin (Susie) from Waddy, Kentucky. A life well-lived and well-traveled will be celebrated with a visitation 4 to 7pm, April 27, 2022 and funeral service at 10am, April 28, 2022 at Pearson’s Funeral Home, 149 Breckenridge Lane, Louisville, Kentucky 40207 with burial at Cave Hill Cemetery to follow. In lieu of flowers, the family suggests donations to Hosparus Health of Louisville (c/o Development Department, 6200 Dutchmans Lane, Louisville, KY 40205) https://hosparushealth.org/donate/ or Boys and Girls Haven (2301 Goldsmith Lane, Louisville, KY 40218) https://boysandgirlshaven.org/support/give-now/ Arrangements under the direction of Pearson's.

The family of Elizabeth "Billie" Franklin Hoertz created this Life Tributes page to make it easy to share your memories.

Send flowers to the Hoertz family.