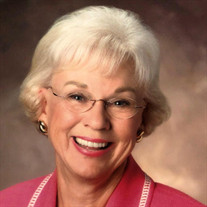 Eleanor Ann Rogers, 85, passed away at the Sam Swope Care Center, O'Daniel House, on April 1, 2020 after a lengthy and courageous battle with Alzheimers Disease. She was born July 15, 1934 to Rosa and Lester B. Smith in Russell County, Kentucky. Eleanor worked for General Motors for 17 years in Indianapolis, Indiana, and Louisville, Kentucky until she was transferred to Tucson, Arizona in 1973 as part of a management training program. Eleanor was the first woman in General Motors to be promoted to such a management position. Eleanor resided in Tucson, Arizona from 1973 until 2017 when she returned to Louisville, Kentucky to be near her daughter and family. Eleanor was actively involved in the Tucson community serving as Past President of the Soroptomist Club and Southwest Woman's Charitable Club. She was also a long time member of Skyline Country Club and served as former president of the Skyline Woman's Club and Skyline Country Club Women's Golf Association. In addition, she was a PEO, and former Deacon and Elder of St. Andrews Presbyterian Church. Eleanor was a vibrant and beautiful woman who was known for her smile and kind spirit that drew others to her. She was an encourager to many as a Stephens Minister and was a wonderful friend to those closest to her. She loved her family, enjoyed life with her many golf and bridge friends in Tucson, and relished her travels all over the world. Her family is grateful for the quality time spent with her after she moved to Louisville in 2017 and are heartbroken that dementia robbed her of many more years with us. Eleanor is survived by her only child, daughter, Patricia C. Barron (John), grandchildren; Melissa Gilmour (Scott), Adam Barron (Kaet), and Griffin Barron (fiance, Juli Larson) and seven great grandchildren; Jadon Gilmour, Reece Gilmour, Vera Gilmour, Xavier Gilmour, Liv Gilmour, Drew Barron, and Jill Barron. She is also survived by a number of nieces and nephews and her many wonderful friends in Tucson. In addition to her parents, Eleanor was predeceased by three sisters, Alpha Hammond, Orpha Roy, and Mildred Wilson; four brothers, Delno Smith, Arlie Smith, Doris "Smitty" Smith, and Jerry Dean Smith. The family would like to offer heartfelt thanks to the entire staff of Sam Swope Care Center, O'Daniel House, and Hosparus for their kind, compassionate, and highly skilled care of our mother, grandmother, and great-grandmother.In lieu of flowers the family requests expressions of sympathy may be offered in the form of contributions to Hosparus Health Louisville, 3532 Ephraim McDowell Drive, Louisville, KY 40205 or to The Center for Women and Families, PO Box 2048, Louisville, KY 40201. At her request, cremation has been chosen and, due to the coronavirus pandemic, visitation and services were private. Pearson Funeral Home is entrusted with arrangements.

Eleanor Ann Rogers, 85, passed away at the Sam Swope Care Center, O'Daniel House, on April 1, 2020 after a lengthy and courageous battle with Alzheimers Disease. She was born July 15, 1934 to Rosa and Lester B. Smith in Russell County, Kentucky. Eleanor... View Obituary & Service Information

The family of Eleanor Ann Rogers created this Life Tributes page to make it easy to share your memories.

Send flowers to the Rogers family.