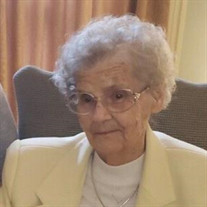 Ellie passed away peacefully on Monday, January 20, with family and friends by her side. She was 85. She was formerly, Eleanor Prizinsky, daughter of Michael Prizinsky and Josephine Kalivoda Prizinsky of Erie, PA. Ellie was preceded in death by her parents, her younger sister, Kathleen Prizinsky-McShea, two sons, David and Robert, and two granddaughters, Staci and Rose. Her husband of 63 years, Richard L. Butsch, passed away November 2018. Ellie leaves to cherish her memory her son, Rick (Pam); daughter, Kathy Russell (David ); grandchildren, Ben Butsch (Mary), Josh Butsch, and Brittany Russell; great grandchildren, Hunter, Miles, and Alyza Butsch, and several other family members in Louisville and Pennsylvania. Ellie was a devout Catholic who attended Our Lady of Lourdes. She devoted her life to her husband, four children, four grandchildren, and three great-grandchildren. She was a fan of U of L basketball. Mom would call Rob after every game to discuss their performance. She and dad also found great joy in relaxing with family and friends at Barren River. Ellie solved hundreds of puzzles---literally. Dad displayed many of them at their home and cabin. She prayed thousands of rosaries, again, literally. She left us only when she has certain we would be okay without her. The family would like to thank all who reached out with words of love and encouragement during Ellie's final days. In particular, we wish to thank Anna, Paula, Korlu, Shironda, Debra, Marilyn, and Amy, from Home Instead Senior Care, as well as the compassionate folks at Hosparus and ARGI Financial Group. Special thanks to George Brinkhaus, Marge Borders, Betty Miller, Father Rice, Father Miller, and Father Scott of Our Lady of Lourdes. A funeral mass will be held at 12PM, Wednesday, January 29, 2020 at Our Lady of Lourdes, 508 Breckenridge Lane with burial to follow at Calvary Cemetery. Visitation will be 3-7, Tuesday January 28, 2020 at Pearson’s Funeral Home, 149 Breckenridge Lane. In lieu of flowers, donations may be made in Ellie’s name to "Mass of the Air," American Diabetes Association, Little Sisters of the Poor, St. Jude Children’s Hospital, or Maryknoll Fathers & Brothers.

Ellie passed away peacefully on Monday, January 20, with family and friends by her side. She was 85. She was formerly, Eleanor Prizinsky, daughter of Michael Prizinsky and Josephine Kalivoda Prizinsky of Erie, PA. Ellie was preceded in death... View Obituary & Service Information

The family of Eleanor Prizinsky Butsch created this Life Tributes page to make it easy to share your memories.

Ellie passed away peacefully on Monday, January 20, with family...

Send flowers to the Butsch family.