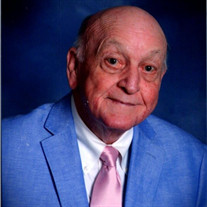 Edward Lyle Turney, 85, passed away on January 17, 2020, with his family by his side. He was born July 18, 1934, in Auburn, TN. Ed navigated life with zest - growing up in Clarksville, TN. His talents allowed him to become a trombone player, music teacher, business professor and entrepreneur. He graduated from Tennessee Tech in Cookeville, TN, in 1957. Ed enjoyed six years on the faculty at the University of Tennessee at Martin, teaching music and marketing while also the Director of the Martin High School Band, where he joyously led the band to win over 72 competitions nationwide. His career in healthcare began in 1965 when he became an Administrator at Obion County Hospital in Union City, TN. He went on to work for the former Extendicare, Inc., in Tennessee, California and Kentucky. In 1972, he was a founding partner of United Medical Corporation. In 1983, he formed Health Concepts Corporation and Therapy Solutions. Ed loved people, golf, music, fishing, banana pudding, clowning and most importantly, his family. He was a member of Broadway Baptist Church, where he sang in the church choir. He will be remembered for his infectious personality, kindness to others and generous spirit. Ed was preceded in death by the love of his life, Suzanne S. Turney, his parents, Ralph and Opal Turney, his brother, Doyle Turney, his brother-in-law, Richard Wyatt, his sister-in-law, Cheryl Pollard and his nephew, Morgan Pollard. He is survived by his children, Chris Turney (Nuria Hernandez), Melissa Gernert (Rudy), Todd Turney (Wendy Lam) and Scott Turney (Bridget); and five grandchildren, Michael Turney, Ryan Turney, Carson Gernert, Layne Gernert, and Lyle Gernert. He is also survived by his brother, Terry Turney, sister-in-law, Harriett Wyatt, and brother-in-law, Larry Pollard. A Celebration of his Life will be held Saturday, March 7th at 11:00 am at Broadway Baptist Church, 4000 Brownsboro Road. The family will receive friends following the service in Friendship Hall. In lieu of flowers, donations may be made to Broadway Baptist Church Music Project Fund or your charity of choice. Ed's family would also like to express their appreciation to Mamie Norris for her loving care.

Edward Lyle Turney, 85, passed away on January 17, 2020, with his family by his side. He was born July 18, 1934, in Auburn, TN. Ed navigated life with zest - growing up in Clarksville, TN. His talents allowed him to become a trombone player,... View Obituary & Service Information

The family of Edward Lyle Turney created this Life Tributes page to make it easy to share your memories.

Send flowers to the Turney family.