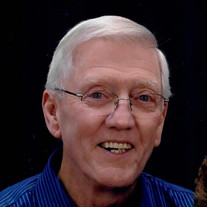 Edward L. Monheimer Jr, 84, of Louisville passed away peacefully on Friday, November 19, 2021 at the Willows of Springhurst. Ed was born on April 12, 1937 in Louisville to Edward L. Sr. and Leotha Metzger Monheimer. He attended DuPont Manual High School and was very involved with alumni activities. After high school Ed attended and graduated from Eastern Kentucky University with a Bachelor’s degree in Education followed by a Master’s degree and a Rank One. Ed was retired from JCPS where he worked for 30 years as a teacher, track and cross country coach, and counselor. He was a member of CrossRoads Christian Church of St. Matthews where he served in many capacities including Deacon, Elder, and chairman of the Property Committee where he earned a lifetime appointment as one of the “Flush Brothers.” Ed was a Kentucky Colonel and he and Betty delivered Meals on Wheels for many years. He had many hobbies including photography and traveling, but his favorite “hobby” was being with his family - especially his four grandchildren and two great granddaughters. Waiting for Ed in heaven were his parents, in-laws Nollis and William Hardin, brothers-in-law John Hardin, L.T. Hardin, and Darrell Horn, and sisters-in-law Mary Lou Hardin, Jo Ann Hardin, and Virginia Hardin. Left to cherish his memory are his loving wife of more than 64 years, Betty Hardin Monheimer; his two sons Ed (Carol) and Bryan; treasured grandchildren Edward (Kate), Tucker, Riley, and Katie Grace; adored great granddaughters, Bailey and Hannah; former daughter-in-law Mary Meredith; brothers-in-law William R. “Mug” (Eileen) and Shelley (Geri) Hardin; and sister-in-law Lois Horn; as well as many nieces, nephews, cousins, friends and his church family. A celebration of Ed’s life will be held at 10:00 a.m. on Wednesday, November 24 at CrossRoads Christian Church of St. Matthews (4004 Shelbyville Road). Visitation will be Tuesday, November 23 from 3:00 to 7:00 p.m. at Pearson’s Funeral Home (149 Breckenridge Lane, Louisville, KY). The family would like to thank the wonderful nurses and staff at the Willows of Springhurst and the Hosparus team for their compassionate care. Expressions of sympathy may be made to his church, the Alzheimer’s Association, or the American Lung Association.

Edward L. Monheimer Jr, 84, of Louisville passed away peacefully on Friday, November 19, 2021 at the Willows of Springhurst. Ed was born on April 12, 1937 in Louisville to Edward L. Sr. and Leotha Metzger Monheimer. He attended DuPont Manual... View Obituary & Service Information

The family of Edward L. Monheimer Jr. created this Life Tributes page to make it easy to share your memories.

Send flowers to the Monheimer family.