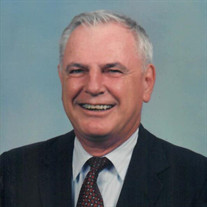 Edward F. Larkin “Ed”, 89, passed away peacefully in the Palliative Care Unit at Baptist Hospital early on the morning of July 23rd, 2019, in Louisville, KY. Born in 1930 and a native of northern New Jersey, Ed graduated from Ridgewood High School (1948). He received his Bachelor’s degree in Chemical Engineering from Rensselaer Polytechnic Institute (1952). While at RPI, he played football, basketball and lacrosse where he was an All-American and co-captain of the RPI Lacrosse Team that was National Co-Champion in 1952. Ed’s career was in the insulation contracting business and he was involved in the construction of many commercial buildings, including the Sears Tower. In retirement he formed Construction Specialty Services with two partners, a company specializing in industrial fire protection. Ed served a tour of duty in the United States Army during the Korean War, fought in the last battle on Pork Chop Hill, and received the Bronze Star for valor. He was a faithful attendee at reunions of the 13th Engineer Combat Battalion Association, also serving two terms as president. For many years, Ed enjoyed coaching and umpiring youth baseball and umpired in the Southeast Regionals of the Little League World Series. Always a faithful church member, Ed served in many leadership positions in the various cities where he was employed, including Sunday School teacher, Elder, Deacon, and Treasurer. After moving to Louisville he was a mentor for confirmands, sat on the building committee and served a term as president of the Seekers Sunday School class at Christ Church United Methodist. In later years he was a regular volunteer for Habitat for Humanity often serving as the leader for homes sponsored by Christ Church. An avid Boston Red Sox fan, his interest in sports was always active as he enjoyed playing golf and following the NCAA lacrosse playoffs as well as watching his kids and grandkids games and following various sports on television. Ed’s family will dearly miss his sharp intellect, his larger than life personality, his great humor and his zest for life, but mostly his wife and family will miss his loving devotion to them all. Ed was predeceased by his parents, George L. Larkin and Frances Ringel Larkin, his brother, George L. Larkin, Jr., his brothers-in-law Jerry Hiner and Bob Cox, and his sister-in-law Margaret Kattenhorn Hiner Cox. He is survived by his loving wife of 64 years, Barbara (“Bobbie”) Grace Larkin, son Thomas Larkin (Susan), daughters Teresa Muir (John), Laura Slider (Robert), and Kathleen Redick (Scott); grandchildren John Muir (Becky), Stephanie Muir (fiance Josh Crowley), Kimberley Larkin, Bethany Larkin, Kyle Larkin, Diana Slider, Ian Slider, and Claire Redick; Great-grandchildren Zachary Muir, Emma Muir; sister-in-law Grace Kattenhorn, nephew Jimmy Hiner (Lisa) and niece, Judy Hiner Rummage (Steve). The family is grateful for the skilled nursing care Ed received at the Forum Health Care Center and Baptist Health Hospital. A funeral to honor Ed will be held on Friday, July 26, at Christ Church United Methodist, 4614 Brownsboro Road, Louisville, Kentucky. Visitation will begin at 12:00 PM in the church parlor and the sanctuary service will start at 2:00 PM. Interment will follow at a later date at Louisville Gardens East. Memorial contributions may be made to Habitat for Humanity or a charity of the donor’s choice.

Edward F. Larkin &#8220;Ed&#8221;, 89, passed away peacefully in the Palliative Care Unit at Baptist Hospital early on the morning of July 23rd, 2019, in Louisville, KY. Born in 1930 and a native of northern New Jersey, Ed graduated from Ridgewood... View Obituary & Service Information

The family of Edward F. Larkin created this Life Tributes page to make it easy to share your memories.

Edward F. Larkin “Ed”, 89, passed away peacefully in the Palliative...

Send flowers to the Larkin family.