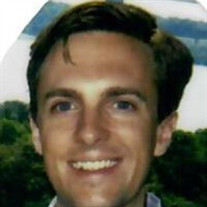 Edward Ambrose Ford IV “Ted” passed away at home on January 1, 2022 at age 55 of Frontotemporal Dementia. He was a graduate of Anchorage School, St. Francis High School and New York University. He lived 26 years in New York City before returning to his home town, Louisville. While living in New York City, he was employed at several art galleries, an antique and art publication, The Museum of Modern Art and as a freelance graphic designer. He was preceded in death by his father, Edward Ambrose Ford III, “E.A.”. He is survived by his mother, Susan Green Ford, two brothers, Matthew D Ford (Holly) and Tyler C Ford (Kim), three nieces, Reiley, Eliza and Loretta Ford and a nephew, Marlin Ford. He is also survived by his three aunts, Carolyn Green Hutto, Cheri Green and Sue Ellen Ford Bird (Leo) and two uncles, Hugh Green and Tom Ford (Gail) and several cousins. Ambrose was a kind, thoughtful and generous man. He was artistic and creative. He had an inquisitive mind and was an avid reader with a major book collection. He had a wonderful sense of humor with an infectious laugh. Ted had a courageous attitude toward his illness and certainly, fought the good fight through the many years he was ill. He was blessed with extraordinary care from his caregivers and family. Visitation will be Saturday at 10am, January the 8th at Christ Church United Methodist, 4614 Brownsboro Road; Louisville, KY 40207. A memorial service will follow at 12pm. Arrangements under the direction of Pearson’s, "Where Louisville Goes To Remember." In lieu of flowers, please consider a donation to, Community Foundation of Louisville in care of the Ford Family Fund, to support and research for Frontotemporal Dementia (FTD) and ALS, 325 W. Main St #1110; Louisville, KY 40202

The family of Edward Ambrose Ford IV created this Life Tributes page to make it easy to share your memories.

Send flowers to the Ford family.