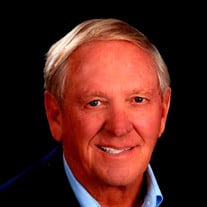 Edward Donald Duane, 81, passed away at his home on February 5, 2020. Don was born in Louisville, Kentucky to Mary Kathryn Jaegle and Edward Joseph Duane February 15, 1938. He graduated from Valley High School in 1956 where he played both basketball and baseball. Don graduated from the University of Louisville Speed Scientific School in 1961 as a civil engineer. He worked briefly as a civil engineer until he formed his passion for building. He founded Duane & Company General Contractors in 1973, which over the following 20 years built notable projects as Lantech, Hellringers, Xerox Building, Ten Thousand Building and a number of other office buildings on Linn Station Road. Later in his career he developed warehouses and residential communities. He was one of Louisville’s first certified property manger designees and was a member of the board of directors of Lincoln Federal Savings and Loan. Don was an avid tennis player, fisherman and private pilot and instructor. He was a member of the U of L Athletic Fund. He was a 38-year member and past president of Hurstbourne Country Club where he enjoyed golf and tennis. Don was a member of Second Presbyterian Church. Don is survived by his wife of 58 years Peggy Speckman Duane and his children Robert Speckman Duane (Laura), Kathryn Duane Purnell (Todd), Susan Duane Donovan (Andrew) and grandchildren Maddie Duane, Elizabeth Duane and Ella Duane, Matthew Purnell (Ellie), John Purnell, and Benton Purnell Robert Donovan, Jackson Donovan and Caroline Donovan. His sister Joyce Duane Aspatore (Corky) and nieces Erin, Bailey and Hadley Dunn, Robyn (Sam) and Kathryn Kaluzny. A memorial service will be held at Second Presbyterian Church, 3701 Old Brownsboro Road, at 2 pm Saturday, February 8, 2020 with visitation 1:00 pm until time of service with a reception following the memorial service in the fellowship hall. A special thanks to the angels that were his caregivers this past year, especially Eugene “Hutch” Bryant. Expressions of sympathy maybe made to Heuser Hearing and Language Academy 115 E. Kentucky Street 40203 or Hosparus 3532 Ephriam McDowell Drive 40205

Edward Donald Duane, 81, passed away at his home on February 5, 2020. Don was born in Louisville, Kentucky to Mary Kathryn Jaegle and Edward Joseph Duane February 15, 1938. He graduated from Valley High School in 1956 where he played both... View Obituary & Service Information

The family of Edward Donald Duane created this Life Tributes page to make it easy to share your memories.

Edward Donald Duane, 81, passed away at his home on February...

Send flowers to the Duane family.