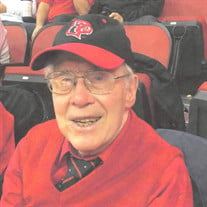 Edgar Allen Duncan, Jr. Louisville-99, died July 11, 2021 in Louisville. Allen, as he was known, was born in Uniontown, KY on February 4, 1922, the son of Edgar Allen Sr. and Ethel Duncan. He grew up in Uniontown, and Morganfield, and graduated from Morganfield High School in 1940. He attended Western Kentucky University in 1940-41. Allen then moved to Louisville where he began working for the L&N railroad. He enlisted in the United States Marine Corps shortly after that. He served as a rear gunner in a dive bomber in the South Pacific during World War II. Upon his return from the war, he resumed his job at the L&N railroad. There he met and married the love of his life, Frances Louise Reed. Allen and Frances were married for 71 years, until her death on August 26, 2018. They raised four daughters in the Highlands, and were longtime members of St. Andrew's Episcopal Church. Allen also worked as a pari-mutuel clerk during the Fall and Spring Meets at Keeneland and Churchill Downs. He retired from Churchill Downs at age 85 after more than 50 years of service. He is survived by his four daughters and their spouses - Nancy and Jack Larry of Louisville; Becky and John Peter of Houston; Julie and Rick Morris of Louisville; Suellen and Dr. Robert Nolan, Jr. of Louisville. He is also survived by his five grandchildren and their spouses, and four great-grandchildren. The grandchildren and their spouses are - Drew and Sara Morris, and their children Reagan and Grant; Drs. Jamie and Marian Morris, and their children Mollie and Jack; Becky Morris; Meggie and John Simpson; Ellie and Dr. Ashwin Raghavan. Allen's family wishes to thank his caregivers Kelly, Monica, and Mary for their loving kindness in their care for him. The funeral will be held Thursday, July 15th at 11:00 AM at St. Andrew's Episcopal Church, 2233 Woodbourne Ave. Private interment will follow the service at Resthaven Cemetery. Expressions of sympathy may go to St. Andrew's Episcopal Church

Edgar Allen Duncan, Jr. Louisville-99, died July 11, 2021 in Louisville. Allen, as he was known, was born in Uniontown, KY on February 4, 1922, the son of Edgar Allen Sr. and Ethel Duncan. He grew up in Uniontown, and Morganfield, and graduated... View Obituary & Service Information

The family of Edgar Allen Duncan Jr. created this Life Tributes page to make it easy to share your memories.

Send flowers to the Duncan family.