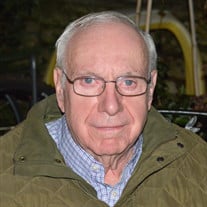 John Dean Howard, M.D. died at home on October 22, several years after being diagnosed with Alzheimer’s and Parkinson’s diseases. He was born January 23, 1936, in Hardinsburg, KY, to Mary Sheeran Howard and Jesse Moorman Howard, Jr. John attended St. Romuald’s grade school, then just two rooms, and graduated from Breckinridge County High School. He earned a B.S. in Chemical Engineering from the University of Notre Dame, South Bend, IN, followed by graduate school in physics at Fordham University, the Bronx, NY, and a stint in the U.S. Army Infantry and Reserves. He was admitted to medical school at the University of Louisville and earned an M.D. degree in 1965. John interned at Philadelphia General Hospital in Philadelphia, PA, and completed a residency in Internal Medicine at Mayo Clinic in Rochester, MN. While in Rochester he met and married his wife Lynn, a Texan and dietetic intern at St. Mary’s Hospital. John practiced medicine in Louisville for nearly 40 years, first general practice on South Third Street with Roy Tunnell, M.D. and Todd Richardson, M.D. Following residency, he practiced internal medicine in a group led by Bernard Popham, M.D. at St. Joseph’s Infirmary, then as a solo practitioner primarily at Audubon Hospital. His patients, most with him over many years, loved and respected him, as noted by the stacks of letters they wrote to him upon his retirement. John was a member of the Jefferson County Medical Society, the American College of Physicians, and was certified by the American Board of Internal Medicine. While John’s life revolved around caring for his patients, he still found time to spend with his family, particularly his children and many nieces and nephews. He was an avid reader, always non-fiction and usually historical. He would thoroughly read about and dissect a subject; for instance, over the years he delved into the French Revolution, American history, physics, and the convergence of religious faith with science. He also avidly researched his family history and became a member of the Sons of the American Revolution. He grew tobacco and attempted to raise cattle on a farm in Breckinridge County, part of a Revolutionary War land grant to ancestor James Howard. He was a proud Kentucky Colonel and enjoyed long walks in the Olmsted Parks near his home. In addition to his parents, John was predeceased by five of his six siblings: Mabel Ann Gibson; Mary Jane Jackson (Robert, deceased), Jesse Moorman Howard, III (Dorothy, surviving); Robert Joseph Howard (Libby, surviving); and infant sister Polly. He is survived by his wife of nearly 48 years, Lynn Johnston Howard; his daughter Sarah Jane Galloway, her husband John Barton Galloway and their daughter Nell Marie; and his son John Dallas Howard, all of Louisville. John was a beloved brother and uncle and leaves behind his sister Helen Caroline Scragg (Hardin, deceased) of Charleston, WV, as well as numerous nieces and nephews. The family wishes to thank Steve Studdard for his kindness and care over the last several years, as well as the staff of Hosparus Louisville, who made it possible for John to remain at home until the time of his death. Due to COVID-19, a private funeral mass will be held at the Church of the Holy Spirit. On a later date, John’s ashes will be interred in the family plot at St. Romuald’s Catholic Church in Hardinsburg. In lieu of flowers, the family asks that memorial contributions be made to the Olmsted Park Conservancy, 1299 Trevilian Way, Louisville, KY 40213, or a charity of the donor’s choice.

The family of Dr. John Dean Howard created this Life Tributes page to make it easy to share your memories.

Send flowers to the Howard family.