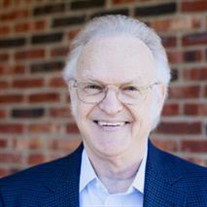 The Reverend Dr. E. Frank Tupper, Jr., 79, passed away Friday, February 28, 2020, surrounded by friends who are family and family who are friends. Dr. Tupper was a Baptist theologian who taught generations of seminary students that when it comes to the problem of evil and suffering, “God always does the most God can do.” Though he spent the last three years of his life confined to a wheelchair as a quadriplegic after a fall in his home, Frank never ceased to live fully with the warmth, faith, and theology that permeated his life and the lives of those he loved. Elgin Frank Tupper, Jr., was born January 28, 1941, in Greenwood, Mississippi, to Elgin Frank Tupper, Sr., and Frances McMinn Tupper. He attended public schools in Greenwood, graduating from Greenwood High School in 1959. He married Betty Jean Wilkins of Houston, Mississippi. Betty passed away in 1983 following a battle with breast cancer. Frank is survived by two children, Elgin Frank Tupper III and Elizabeth Michelle Tupper Butler, his son-in-law Brandon Lacy Butler, as well as two grandchildren, Silas Tupper Butler and Betty Ann Butler, and two adult step-grandchildren, Joseph Allen Jordan and Parker Anthony Jordan. He also is survived by his sister, Martha Azalee Finch, and her husband, the Reverend Dr. Marcus D. Finch, his brother George Tupper, and numerous nieces and nephews. Dr. Tupper was a graduate of Mississippi College, where he excelled in debate and became an advocate in the civil rights movement. He completed his Master of Divinity from Southwestern Baptist Theological Seminary before earning his Ph.D. at Southern Baptist Theological Seminary in Louisville, Kentucky. His studies included a year of doctoral research at the University of Munich with Wolfhart Pannenberg, one of the most influential theologians in the 20th century and the subject of Dr. Tupper’s dissertation, The Theology of Wolfhart Pannenberg. Ordained to the ministry at Crescent Hill Baptist Church in Louisville in 1967, Dr. Tupper served six years as pastor of First Baptist Church of Edmonton, Kentucky. A popular preacher, he served as interim pastor at numerous congregations in Kentucky and Mississippi, including Highland Baptist Church and Crescent Hill Baptist Church in Louisville. Dr. Tupper joined the theology faculty of Southern Seminary in 1973. He served as Professor of Theology until 1996 when he moved to become a founding faculty member of the Wake Forest University School of Divinity in 1997. He retired from Wake Forest Divinity School in 2016 with the title of Distinguished Professor of Divinity Emeritus. He was a longtime member of the American Academy of Religion and the Cooperative Baptist Fellowship. In 1995, Dr. Tupper published a groundbreaking book, A Scandalous Providence: The Jesus Story of the Compassion of God, which combined more than 15 years of academic research into the providence of God with the lived tragedy of losing a spouse to cancer. His book is an intimately powerful one that all should read. Dr. Tupper was known for his unique, inimitable creativity and powerful impact in teaching and preaching. He often invoked unusual subject matter, including the gospel of country music and the rejection of “suck-and-blow” preaching of overzealous, uninspiring hucksters. The stories of his classroom teachings will persist beyond his passing. Throughout his career, Dr. Tupper fought for equality of women with men in all positions of ministry, and he advocated for inclusion of LGBTQ individuals in congregations true to God’s love for all of humanity. Frank re-encountered suffering during the night of February 12, 2017, when fell in his home alone and was unable to move. Diagnosed with a catastrophic spinal cord injury with paralysis, he battled back with his stubborn strength and the encouragement of his family to regain a quality of life with years of continued teaching, laughter, and love with his family. In addition to the devoted care of his daughter and son following his accident, Frank received loving care these past three years from Linda Heuerman, (Michelle’s mother-in-law), Madilyn Hoffman, and Kristina Ushyarova, without whom he could not have embraced his life fully. Frank found the joy of his life’s calling in his family, his students, his faith, and the music of Willie Nelson and Kris Kristofferson. Rejecting all platitudes about suffering and God’s “will,” Frank believed that faith endured through seasons of doubt and tragedy. As he often said, when he struggled with doubt, he took those doubts to the foot of the cross and allowed Jesus to believe for him. The light shines in the darkness, and the darkness shall not overcome it. Visitation is at Pearson’s, 149 Breckenridge Lane in Louisville, Kentucky, from 4:00 to 7:00 p.m. on Thursday, March 5th. Funeral service will be at Highland Baptist Church 1101 Cherokee Road at 2:00 p.m. on Friday, March 6th. In lieu of flowers, the family asks that Memorial Gifts in honor of Frank Tupper be given to Highland Baptist Church to help the church care and support those living with chronic illness and their families.

The Reverend Dr. E. Frank Tupper, Jr., 79, passed away Friday, February 28, 2020, surrounded by friends who are family and family who are friends. Dr. Tupper was a Baptist theologian who taught generations of seminary students that when it comes... View Obituary & Service Information

The family of Dr. E. Frank Tupper Jr created this Life Tributes page to make it easy to share your memories.

Send flowers to the Tupper family.