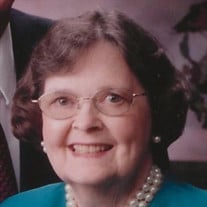 Dr. Betty Wolfe Long Scott passed away peacefully on Monday, April 26, 2021. Betty was born on Dec. 9, 1930 in Louisville, KY to Laura (Bledsoe) and Woolwine Wolfe. She graduated from Shawnee High School, and the University of Louisville where she was a member of Zeta Tau Alpha Fraternity. Betty earned her B.S., M.A.T., and Ph.D. at U of L and was a lifelong Cardinal fan. During her career teaching biology at Parkland Jr. and Atherton High Schools, she received the Outstanding Biology Teacher Award for Kentucky, presented by the National Association of Biology Teachers in 1977. She served for decades in the Louisville Regional Science Fair program and after retirement from JCPS served as Assistant Director of the1997 Louisville Intel International Science and Engineering Fair which hosted students from around the world. The success of this locally directed event set the example for future international fairs, and allowed for the creation of a Regional Science Fair endowment fund which continues to support Louisville’s future scientists. Following her passion for knowledge and interest in the environment, and with the enthusiastic support of her husband Bill, Betty conducted doctoral research of regional alga, spending countless hours in the field collecting and analyzing samples from across the region. Her research led to groundbreaking findings in the life cycle of the alga Chaetophora Elegans and Chaetophora Incrassata, which she presented to the worldwide scientific community in Copenhagen, Denmark. Later, Betty redirected her research to documenting her genealogy. Inspired by the strength of her grandmother, she wrote and published the biography Herstory of Nancy Price Arnsparger and Her Family. She traced her ancestry to John Alden, Sr. (crew member on the Mayflower). Betty became a member of the Daughters of the American Revolution having traced her ancestry to pioneer Samuel Boone (brother of Daniel Boone). She proudly served as Regent of the Fincastle Chapter D.A.R. In addition to her parents, Dr. Scott is predeceased by her husband of 60 years, and the father of her children, William (Bill) Glenn Long, Jr. Also predeceasing her was her second husband, Dr. Ralph M. Scott, and sister Gloria Milliken. Betty is survived by her children Leslie L. Olson (Ray), Anne Elizabeth Long (David Dearner), Wm. Glenn Long, III (Denise), and her brother Douglas K. Wolfe. Also surviving are her grandchildren, Reid Olson (Kristen), Keith Olson (Morgan), David Homm, Jr. (Melissa Gaddie), Jacqueline H. Wells (Ryan), Stephanie L. Davis (Jeff), William G. Long IV, and Samuel Morin Long. She also leaves behind 12 great-grandchildren. Betty will be remembered fondly for her generosity, compassion for others, and dedication and loyalty to her family as well as the Democratic Party. A private graveside service was held at Cave Hill Cemetery. Expressions of sympathy may be directed to the Treyton Oak Towers Employee Scholarship Fund, 211 W. Oak St. Lou, KY 40203, or charity of your choice.

Dr. Betty Wolfe Long Scott passed away peacefully on Monday, April 26, 2021. Betty was born on Dec. 9, 1930 in Louisville, KY to Laura (Bledsoe) and Woolwine Wolfe. She graduated from Shawnee High School, and the University of Louisville where... View Obituary & Service Information

The family of Dr. Betty Wolfe Long Scott created this Life Tributes page to make it easy to share your memories.

Send flowers to the Scott family.