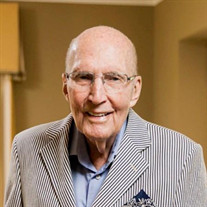 Douglas “Doug” Dewitt Stegner of Louisville, Kentucky passed away peacefully on Wednesday morning, June 23rd at the age of 92. Doug was born to Stella Caroline DeWitz and Wesley Dewitt Stegner on October 12, 1928, in Caledonia, Minnesota. He was the big brother to Lola and spent his formative years in Madison, Wisconsin and graduated from the University of Wisconsin in 1950. He was drafted immediately into the Army and was stationed in Indianapolis where he served in the Finance Center. He quickly fell in love with “the vivacious woman in the red dress,” Alice Marie Tellman, and they married on April 11, 1953. They had three boys in succession while in Indianapolis and then the family moved to Louisville in 1958, when Doug joined the employee benefit consulting firm, Meidinger & Associates. In Louisville, their additional dreams came true with the birth of two girls. Doug served as Chairman & CEO of Meidinger until 1984, when they merged with William M. Mercer (Mercer). After the merger, Doug served as Vice Chair of International Company, Chairman of U.S. Company and Chairman of Managing Director Group until his retirement in 1990. Doug used his leadership skills and strategic planning strengths to develop and improve organizations for more than 50 years. During his professional years he served as the Founding Member of the: Louisville Employee Benefits Council, Southern Pension Conference, Employee Benefit Research Institute, and Board of Louisville Olmsted Parks Conservancy. With others, he served as a Founder of: Goals for Greater Louisville, The Thomas Merton Foundation, Intervention Resource Center, Stegner Investment Associates, Inc., and The Clifton Center. He also served as a Member of the: Advisory Board of the International Foundation of Employee Benefit Plans, Board of Directors for the Association of Private Pension and Welfare Plans, Board of Overseers of University of Louisville, Board of Directors of the Community Foundation of Louisville, Board of Citizens Fidelity Bank and Trust Company (PNC), and Governancy Task Force appointed by the mayor and county judge. During his retirement, he shared his strengths by donating his time to assist non-profit teams with strategic planning. This effort usually took almost a year to complete. Charities that benefitted from his expertise include the: Community Foundation of Louisville (twice), Center for Non-Profit Excellence (twice), Asia Institute-Crane House, Thomas Merton Foundation (twice), Louisville Olmsted Parks Conservancy (three times), St. Vincent de Paul Society Louisville, Clifton Center, Women 4 Women, Cathedral Heritage Foundation (now the Center for Interfaith Relations), Dreams With Wings, Gheens Foundation, Kentucky Shakespeare, Operation Parent, The Morton Center, Anchal Project, and Citizens Attacking Addiction. In 2019, at the age of 90, he was selected by Louisville Business First as its “Volunteer of the Year.” Besides his parents, Doug is proceeded in death by his wife of more than 44 years, Alice, and his sister Lola. Doug was a proud patriarch of his family, including three sons; Greg (Vickey), Brad (Shops Howard), and Jeff (Peri), and his two daughters; Beth (Doug) Peabody and Missy (John) Vella; his seven grandchildren, Erica, Haley, McKay, Zack, Maddie, Corinne, and Alice; and his five great-grandchildren. The family wishes to thank Mike Donohue for all of his loving care and support, as well as the staff of Belmont Village. Doug’s legacy to this fine city remains with two more impactful accomplishments. As Chairman of Meidinger, he led the effort to revitalize downtown in 1980 by agreeing for the firm to become the anchor tenant so that Meidinger Tower in the Galleria (“Fourth Street Live!”) could be built. In 2018, he led the effort with the city to revitalize Cherokee Park’s Bonnycastle Hill by committing to help fund the building of the “Stegner Pavilion” so that all can enjoy the beauty of the area where he raised his family. Visitation will be held on Wednesday June 30th from 3:00 – 7:00 pm at Pearson’s, 149 Breckenridge Lane. A celebration mass will be held on Thursday, July 1st at 11:00 am at St. Francis of Assisi Church, 1960 Bardstown Road in the Highlands. To carry on his legacy of love for the city of Louisville, memorial contributions may be made to the Olmsted Parks Conservancy,1299 Trevilian Way, Louisville, KY 40213.

The family of Douglas "Doug" Dewitt Stegner created this Life Tributes page to make it easy to share your memories.

Send flowers to the Stegner family.