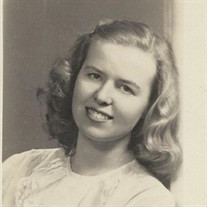 Dorothy Ann Diggs Rose, AKA Meemaw and Aunt Dotty, passed from this life March 28, 2019. Dotty was born December 14, 1929, and raised in Louisville. She started life in the Highlands and moved as a young child to “The Potato Farm”, that is now St. Matthews. She graduated from Atherton High School and Hanover College where she received her B.S. in Chemistry and French with minor in Spanish. She was a member of Alpha Delta Pi sorority there and later served as President of the Hanover Chapter. She later earned her teaching certificate. Always reading, learning and curious about the world, she went back to college in retirement and graduated from Bellarmine University with a Masters in Liberal Studies. Her favorite job was with TWA Airlines because it enabled her to travel and meet lots of people, including Muhammad Ali and his trainers when he was first starting out. She was a member of St Matthews Episcopal Church and subsequently Edenside Christian Church, which she attended for over 50 years. She had a beautiful singing voice, played piano and created wonderful works of art. One of the neighborhood children told the story of how, if it was raining outside, she would bring all the kids inside, feed them popcorn and play the piano until it quit raining. She is preceded in death by her parents, Matthew O’Brien Diggs Sr. and Dorothea Leary Diggs, by her husband, Harold Rose and Nephew, Matthew O’Brien Diggs III. She is held in the greatest place of love by those who survive her. Her brother, Matthew O’Brien Diggs Jr. and his wife Nancy Diggs, son, Daniel O’Brien Rose and his wife Beth, Grandson Nathaniel O’Brien Rose, and many beloved nieces and nephews. She will truly be missed. She made the world a better place by being in it. A great deal of thanks to Treyton Oak Towers, a place she loved and that loved her back. Funeral Service 12 pm Saturday at Pearson’s, 149 Breckenridge Lane, with burial to follow at Cave Hill Cemetery. Visitation 4-6 pm Friday at Pearson’s and 11 am Saturday until time of service. Memorials gifts may be sent to Henry County Christian Church, Edward Berry Pastor and Dotty's nephew, or Treyton Oak Towers Scholarship Fund.

Dorothy Ann Diggs Rose, AKA Meemaw and Aunt Dotty, passed from this life March 28, 2019. Dotty was born December 14, 1929, and raised in Louisville. She started life in the Highlands and moved as a young child to &#8220;The Potato Farm&#8221;,... View Obituary & Service Information

The family of Dorothy "Dotty" Ann Diggs Rose created this Life Tributes page to make it easy to share your memories.

Send flowers to the Rose family.