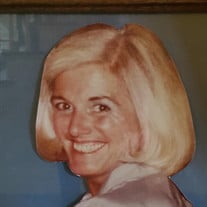 Donna Alford Lansing passed away peacefully on ­­­­­­­­­­­­June 22, 2021. She was born in London, Ontario, Canada in 1929, the second of four children of an electrician and a homemaker. She excelled in high school and had many interests outside of her studies, including sewing her own clothes and playing piano. After high school, she went to University of Western Ontario (now Western University) in London where she was outgoing and popular and athletic, making her an outstanding cheerleader; she graduated in 1951 with a Bachelor of Arts. It was at Western where she met her future husband, Allan Lansing, while he was performing magic tricks at a party. They decided to get married upon her graduation in 1951, and it took her months to make her own sophisticated and multilayered wedding dress. While he finished medical school at Western, she worked at London Life Insurance Company; her score on their pre-employment test was higher than most of the men taking the test, resulting in her assignment to the actuarial department which was a great honor, especially for a woman during that time. Donna and Allan moved back and forth from Canada to the United States several times while Allan continued his academic and surgical training, including getting a PhD in physiology. They started a family in 1954, and Donna frugally managed the meager income her husband earned during his training while raising a household of three young children. They permanently settled in Louisville, Kentucky in 1963; she used her artistic talents to design and coordinate the building of a new home and to be the interior designer for that home and for her husband’s medical offices. In 1983 they bought the historic home of Boxhill on a bluff over the Ohio River, which at the time was unoccupied and in need of renovation. Donna relished the challenge of transforming Boxhill back to its former grandeur, and later she added a large sunroom and an outdoor swimming pool. Boxhill became the perfect place to hold many functions including fundraisers for charities and other organizations, as well as for yearly Derby and Christmas parties, invitations to which were always coveted. She planned and did all of the cooking for these functions, which amazed those around her. Because of her inherited otosclerosis with hearing loss, she was a strong supporter of the Louisville Deaf Oral School. Above all Donna was proud of her contribution in helping her husband be the accomplished man he became. She will be remembered for her intelligence, beauty, multiple talents, and outgoing personality. Donna is survived by her husband of almost 70 years Dr. Allan Lansing and by her children: Ann (Peter), Peter (Amy), and Michele (Kelly). She is also survived by her sister Marilyn and brother Peter, seven grandchildren and twelve great-grandchildren. The family would like to express their deep appreciation for the loving care and attention given by all her caregivers over the past five years. There will be a visitation at Pearson’s, 149 Breckenridge Lane on Friday June 25 from 3-7 PM. Funeral and burial will be private. In lieu of flowers, contributions in her memory may be made to the Louisville Deaf Oral School Foundation, The Lansing Legacy Fund at Bellarmine University, and Hosparus Health Louisville.

Donna Alford Lansing passed away peacefully on ­­­­­­­­­­­­June 22, 2021. She was born in London, Ontario, Canada in 1929, the second of four children of an electrician and a homemaker. She excelled in high school and had many interests outside... View Obituary & Service Information

The family of Donna Alford Lansing created this Life Tributes page to make it easy to share your memories.

Send flowers to the Lansing family.