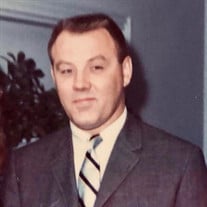 Dr. Donald J. VanderToll passed away on Tuesday, July 7, 2020 following an illness with Alzheimer’s. Don was born on November 15, 1933 in Chicago, Illinois to John Vandertoll and Martina Snip Vandertoll. The family lived in Chicago and then Elgin, Illinois until 1948 when they moved to Louisville, Kentucky and resided at 2550 Ransdall Avenue in the Highlands. Don attended and played football at Louisville Male High School from which he graduated in 1951. He continued to play football at Hope College in Holland, Michigan where he was a multi-year varsity letterman and team captain. He graduated from Hope in 1955, and then attended medical school at the University of Louisville School of Medicine, graduating in 1959. He completed his medical internship at Cook County Hospital in Chicago, and his surgical residency at the Mayo Clinic in Rochester, Minnesota. While at the Mayo Clinic, he also earned a master’s degree in surgery. On July 2, 1960, Don married Jeanette Hansen in Mt. Prospect, Illinois. The couple had their first son, John Jay, II on June 16, 1961 and their second son, James Donald on December 26, 1962. Don moved his young family to Munster, Indiana in Lake County in 1965 and established a successful solo general surgery practice taking care of thousands of patients in Northwest Indiana. In the early 1980’s, Don took a break from his medical practice to instruct students as an Associate Professor of Surgery at the University of Louisville School of Medicine. He returned to private practice in 1987 and continued to care for patients until his retirement in 1997. Following retirement, Don and Jan lived on Lake Michigan in Holland, Michigan until deciding in 2004 to move closer to both their sons and their families in Prospect, Kentucky. An aficionado of cars and planes, Don was a collector of the former and a pilot of the latter. Among his favorite publications were Hemmings Motor News and Bargain Mart which he would peruse for the next old Ford Mustang to purchase and restore. During his lifetime, Don positively impacted the lives of his patients, his friends, and his family. Those who will miss him include his wife, Jan; sons John (Lani) and Jim (Shana) all of Prospect, Kentucky; his grandsons, Jack VanderToll, Charlotte, North Carolina; Hunt VanderToll, Washington, D.C., and Henry VanderToll of Prospect, Kentucky; and his brother Jay (Joan) of Louisville, Kentucky. Due to COVID-19, the family chose a private funeral service on Thursday, July 9 at Pearson's, 149 Breckenridge Lane followed by interment at Cave Hill Cemetery.

Dr. Donald J. VanderToll passed away on Tuesday, July 7, 2020 following an illness with Alzheimer&#8217;s. Don was born on November 15, 1933 in Chicago, Illinois to John Vandertoll and Martina Snip Vandertoll. The family lived in Chicago and... View Obituary & Service Information

The family of Donald John VanderToll MD created this Life Tributes page to make it easy to share your memories.

Send flowers to the VanderToll family.