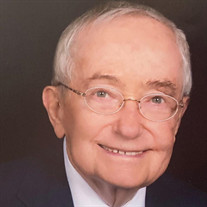 David Edward Branaman was born in Salem, Indiana on March 16, 1932 and passed away on Sunday, March 27, 2022, shortly after celebrating his 90th birthday with family. He is survived by his loving wife Elaine Weddell Branaman, by his three adult daughters Lucinda Branaman Klapthor (Carlson), Mary Ann Branaman, and Laura Branaman Maudlin (Brad), by three grandchildren Christian Klapthor, Carmen Maudlin, Celia Maudlin; and by his sister Martha Ann Branaman Gran (Keith). He joins his parents, the late William Clarence Branaman and Martha Smith Branaman in Heaven. David was a loving, kind, intelligent man who was reserved, dignified, and a true gentleman with traditional values. He deeply loved his wife and best friend of 58 years, and his eyes lit up with joy when spending time with his children and grandchildren. He always concerned himself with the well-being of his family and was a compassionate person who dedicated time and resources to helping others in need. He was an honorable man with integrity who wanted to create a better world for all of us. David was a spiritual man who loved God and faithfully attended Salem First Christian Church Disciples of Christ where he served over many years as Elder, Deacon, Sunday School teacher, Choir Director, Choir Member, and Chairman of the Board. Upon retiring to Louisville in the 1990s, he and Elaine were active members of Beargrass Christian Church where he served as Elder, President of his Sunday School Class, and sang in the Church Choir. David was a hard-working business professional who dedicated his entire life’s career to working at his family business, Smith Cabinet Manufacturing Company / Child Craft Industries, Inc. in Salem, Indiana, where he eventually retired as President and CEO in the 1990s. He was an innovator who loved the company, cared about the well-being of its employees, and wanted to help it grow and thrive. During his tenure, the company introduced the Child Craft line, employed over 1000 people, and earned national awards from Juvenile Products Manufacturers Association (JPMA) for high quality infant and children’s furniture with beautiful, forward-thinking designs. He was an active JPMA member and traveled extensively with Elaine to national furniture markets in New York City, Chicago, Dallas, and High Point, NC to promote Child Craft products to distributors in the U.S. and internationally. David was an active contributor in the Salem community, serving as Chairman of the Salem School Board, Board Member of Mid-Southern Savings & Loan, Member and President of the Salem Chapter of Sons of the American Revolution. He was an active member of Fortnightly Club where community members met regularly to discuss world events. David was a stylish, social man with excellent taste. He was always impeccably dressed, and enjoyed interior design as well as good food and good Bourbon. He loved socializing with family, friends and business associates, and visiting and exploring new places. David enjoyed spending his leisure time with Elaine, his family and friends. He was an avid Bridge player and fan of IU Basketball. He was a lover of the arts, played piano, enjoyed classical music, the theatre, the orchestra, art museums, and design. He enjoyed taking his wife and girls on drives through the hilly Salem countryside in his convertible sports car, reading, gardening, boating with family at Brownstown Lake and Forest, sunning, and the outdoors. He and Elaine traveled extensively throughout the U.S. and to international destinations for work and vacations together and with their daughters and their families, and often enjoyed spending winters in Naples, Florida. David graduated Cum Laude from Indiana University Bloomington with a B.S. degree in Business Management and was a Theta Chi Fraternity member, after graduating Salem High School with honors. He served in the U.S. Air Force and was an Honorary Member of the Kentucky Colonels. David will be dearly missed by his family and all those who knew and loved him. Visitation will be held on Wednesday, March 30, 10:00 am – 12:00 pm at Pearson’s 149 Breckenridge Lane in Louisville, Kentucky, followed by Memorial Services at Pearson’s Chapel at 12:00 pm. A private burial service will be held on Thursday, March 31 with family members at Crown Hill Cemetery in Salem, Indiana. In lieu of flowers, donations would be appreciated to Beargrass Christian Church (Louisville, Kentucky) and Waterfront Botanical Gardens (Louisville, Kentucky), or to the charity of your choice

David Edward Branaman was born in Salem, Indiana on March 16, 1932 and passed away on Sunday, March 27, 2022, shortly after celebrating his 90th birthday with family. He is survived by his loving wife Elaine Weddell Branaman, by his three adult... View Obituary & Service Information

The family of David Edward Branaman created this Life Tributes page to make it easy to share your memories.

David Edward Branaman was born in Salem, Indiana on March 16,...

Send flowers to the Branaman family.