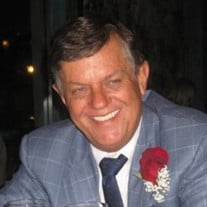 Daniel E. Woodside, 74, passed-away of natural causes at his Louisville, KY residence on Saturday, March 6, 2021. Born in Port Angeles, WA, he was one of five children born to Everett and Elsie Woodside. Dan attended Port Angeles High School and graduated from the University of Washington. His career spanned 40 years in Foodservice Manufacturing, Purchasing and Distribution. He held executive roles as CEO at EMCO, UniPro and UFPC. He served on multiple civic boards including The Kentucky Center for the Performing Arts, The Jewish Hospital & St. Mary’s Foundation and The Heuser Hearing & Language Academy. Dan had the honor of being a Kentucky Colonel. Along with his parents, he was preceded in death by his brothers David, Dale and sister Diane. He is survived by his brother Donald (Vicki), wife Margaret, three sons, Stephen (Jen), Christopher, Andrew (Stephanie) and, two grandsons Christopher and Nathan. He will be remembered and missed for his sage advice, generous smile, and keen business sense. Friends and family are invited to a memorial service on Sunday, March 14th from 3:00 PM to 5:00 PM at Deerfield Farm,11400 Covered Bridge Road Prospect, KY. An additional memorial service will be held on a future date at his final resting place in Port Angeles, WA. Arrangements are being handled by Pearson’s Funeral Home. In lieu of flowers, the family is requesting donations be made in Dan’s memory to the following charities: Churchill Downs Backside Learning Center, 3131 S. 2nd St. #389 Louisville, KY 40208 www.backsidelearningcenter.org/donate. The Kentucky Center for the Performing Arts, 501 W Main St, Louisville, KY 40202 www.kentuckyperformingarts.org/donate, The Heuser Hearing and Language Academy, 111 E Kentucky St, Louisville, KY 40203 https://thehearinginstitute.org/support/donate or a charity of your choice.

The family of Daniel E. Woodside created this Life Tributes page to make it easy to share your memories.

Daniel E. Woodside, 74, passed-away of natural causes at his...

Send flowers to the Woodside family.