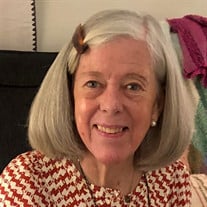 Craig Winston Clark, 73, passed away on June 16, 2019 at her home surrounded by family and friends after fighting a long and courageous battle with cancer. Craig was born in Louisville, KY on August 16, 1945 to the late John H. Clark III and Suzanne H. Clark. She attended Kentucky Home and graduated from Eastern High School. During her time at the University of New Mexico, she was a member of Kappa Alpha Theta, studied photography and discovered her passion for all things “art”. She had a love for people, the fine arts and was an avid gardener. Craig nourished her creative flair through her work at Animal Crackers and Bedded Bliss, cooking, sewing, knitting and her work on flowers for weddings. Craig had a special gift for creating a warm and cozy home and anyone that visited her immediately felt that comfort and her hospitality. When her children were young, she volunteered at their schools and at church and later in life she volunteered her service at Yew Dell Botanical Gardens and Farmington Historic Plantation. When she lived in Chagrin Falls, OH, she was a member of the Chagrin Valley Women’s Club and then later back in Louisville, she was a member of the Glenview Garden Club and the Windy Hills Garden Club. She will be remembered for her warm and infectious smile, her insatiable love for people and her kind, soft-spoken nature. Craig’s positive attitude was truly inspirational and was the reason she was able to battle her illness for so long. She was a beloved daughter, devoted mother and her grandchildren’s “Mimi”. She was deeply treasured by her family and many wonderful friends and will be terribly missed. Her beautiful spirit will live on through the many gardens that she passionately designed, planted and cared for with such love. Craig is survived by her four children, Elisabeth “Lisa” Vranich (Chad) of Mount Pleasant, SC, Laura Ott, Alexander Kah and Abigail Thompson (Paul); her brothers, John H. Clark IV (Gretchen) and Philip Clark (Teresa) of Albuquerque, NM and her nine grandchildren whom she loved dearly; Frederick Ott, Alexander Vranich, Annabelle Ott, Peyton Vranich, Alba Kah, Lucy Thompson, Max Thompson, Beatrix Thompson and Dixie Thompson. The family would like to thank all of her dear friends for their unconditional love and constant companionship, and also to the Hosparus Health team, especially her beloved nurse, Becky Arnold. Memorial service 10 am Tuesday at St. Luke’s Episcopal Church, 1206 Maple Lane, with burial to follow at Cave Hill Cemetery. Visitation 4-7 pm Monday at, Pearson’s, 149 Breckenridge Lane. Donations in Craig’s memory may be made to Norton Cancer Institute/Norton Healthcare Foundation or Yew Dell Botanical Gardens 6220 Old LaGrange Road Crestwood, KY 40014.

Craig Winston Clark, 73, passed away on June 16, 2019 at her home surrounded by family and friends after fighting a long and courageous battle with cancer. Craig was born in Louisville, KY on August 16, 1945 to the late John H. Clark III and... View Obituary & Service Information

The family of Craig Winston Clark created this Life Tributes page to make it easy to share your memories.

Send flowers to the Clark family.