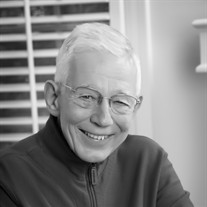 Clyde L. Green, Jr., 86, of Louisville passed away August 15, 2019 Clyde was the loving husband of the late Doris R. Green to whom he was married for 55 years. He was the devoted son of the late Clyde Sr. and Mary S. Green of Maxton, NC. He was the adored father of the surviving Melissa (“Missy”) Green of Boston, MA and David Green (Beth), and cherished grandfather of Benjamin, Owen, and Aidan Green, all of Louisville. He is also survived by his brother, Thomas S. Green and sister-in-law Linda R. Green of Brunswick, ME, and William and Winston, his dear kitties. He was a graduate of Oberlin College and had a lengthy career in investment management, most notably with Capital Holding Corporation and Humana. He served in the US Army during the Korean War and extensively with the US Naval Reserve as an intelligence officer from which he retired as a Captain and senior officer. Clyde was a long-time promoter of youth education ranging from his involvement with the Tong-myung Girl’s High School in Seoul, Korea to his leadership with the Navy League Cadets Unit at Western Middle School in Louisville. He was active in a number of organizations including the Louisville Committee of Foreign Relations, serving as Chairman, and he founded the Louisville Society of Financial Analysts. Moreover, Clyde served as a long-term treasurer for the City of Spring Valley, which exemplified his passion for his local community. His family and friends enjoyed engaging with Clyde on current geopolitical events. In addition, he had a tremendous interest in military history, with a focus on World War II, leading to one of his favorite pastimes of collecting and enjoying books and miniature ships from this era. Funeral service graveside 10 am Wednesday August 21st at Cave Hill Cemetery, friends may gather inside the Broadway by 9:45 am. Visitation 4-6 pm, Tuesday August 20th at Pearson’s, 149 Breckenridge Lane. In lieu of flowers, donations may be made to the WHAS Crusade for Children (https://whascrusade.org/) or The Salvation Army (https://www.salvationarmy.org/).

Clyde L. Green, Jr., 86, of Louisville passed away August 15, 2019 Clyde was the loving husband of the late Doris R. Green to whom he was married for 55 years. He was the devoted son of the late Clyde Sr. and Mary S. Green of Maxton, NC. He... View Obituary & Service Information

The family of Clyde L. Green created this Life Tributes page to make it easy to share your memories.

Send flowers to the Green family.