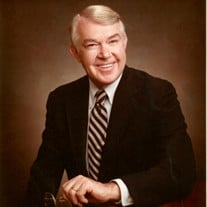 Not sure what to send?

Dr. Clinton Ray Potts passed away peacefully on February 16, 2022 at the age of 96. Ray was born January 1, 1926 in Burkburnett, Texas to Cecil Ray Potts and Grace Crowder Potts. He is preceded in death by his parents, his brother Glendon, and his loving wife of 69 years Barbara Nicholas Potts. Ray did not have a typical upbringing. His mother died when he was eight months old, and he was subsequently raised by his grandparents, Cary and Effie Crowder, in rural Horton, Kentucky. Ray cultivated his tremendous work ethic from a young age, as he helped the Crowders operate the general store, post office, train depot, and their family farm. He and his brother Glendon felt fortunate to have a close-knit family of aunts, uncles, and cousins. While living with his uncle Dr. Marion Crowder during high school, Ray began to develop his passion for medicine. He graduated from Hartford High in 1944 and was drafted into the United States Marine Corps. He was stationed in the South Pacific during WWII with the 10th 155mm Gun Battalion Fleet Marine Force. After the war, Ray attended the University of Louisville on a basketball scholarship. He was a member of the 1948 NAIB championship team and additionally lettered in track. During these years, Ray met the love of his life, Barbara Nicholas, whom he married in 1951. With her support, Ray graduated from the University of Louisville School of Medicine in 1955. He completed his residency in 1960 at The Ohio State University, serving as Chief Resident in Obstetrics and Gynecology. Ray, Barbara, and their four daughters then returned to Louisville, where he practiced medicine for the next 35 years. As an OB-GYN, he dedicated his life to the improvement of women’s health. Highly respected among his peers as a surgeon, Dr. Potts was also adored by his patients—throughout his career he was entrusted with the delivery of over 10,000 babies. Beyond private practice, he belonged to numerous medical societies and was Department Chair of OB-GYN at Methodist, Jewish, and Baptist East hospitals. He was particularly proud of his work in the American College of Obstetricians and Gynecologists (ACOG) as an Executive Board Member and District V Chairman. In 1991 he was honored by ACOG for his outstanding leadership, service, and dedication to the college and his patients. Apart from professional life, Ray gave his time in many capacities, including as a board member of Cabbage Patch and as a volunteer for Habitat for Humanity. Ray was a member of the Louisville Boat Club and Harmony Landing, and a founding member of the Louisville Tennis Club. He was actively involved with St. Francis in the Fields Episcopal Church. Ray was fiercely loyal to any community of which he was a part. He was a proud and active alumnus of UofL and a lifelong fan of the Cardinals. In 1999 UofL honored Ray by inducting him into the Athletic Hall of Fame for basketball. In later years, Barbara and Ray enjoyed entertaining friends and family at their lake house in Wisconsin. Ray also cherished weekly meetings with the Donut Club, a group of retired doctors who traded industry notes over coffee. A generous person with a keen sense of humor and a remarkable memory, he felt blessed to have many great friends. Ray was especially devoted to and proud of his family. He was a deeply caring father, grandfather, great-grandfather, and uncle, and will be greatly missed by those who survive him: his four loving daughters Terry Graves (Guy) of Lexington, Debby Cuttino (Jud) of Savannah, Amy Mitchell (Neil) of Louisville, Ann Smith (Paul) of Dallas; his grandchildren Mill Graves (Julianne), Nick Graves, Kathryn Graves, Leigh Cuttino Doorley (Jon), Judson Cuttino (Coley), Clinton Mitchell (Carolyn), Chris Mitchell, Maggie Mitchell, Alex Smith, Hannah Smith, Leah Smith; his great-grandchildren Penn Graves, Arthur Graves, Paige Doorley, Meg Doorley, Alice Doorley, Celie Cuttino, Quinn Cuttino, Thompson Mitchell, Collins Mitchell; and many nieces, nephews, and cousins. The family is grateful for the love and support of Nazareth Home, Grove Pointe, and special caregiver Doris Pryor. A private burial service was held on February 26 at Cave Hill Cemetery. There will be a memorial service celebrating the lives of Clinton Ray Potts and his wife Barbara Nicholas Potts in late May. Arrangements under the direction of Pearson's. In lieu of flowers, please consider donating to the Cabbage Patch Settlement House, 1413 S. Sixth St., Louisville, KY 40208 or the West End School, 3628 Virginia Ave., Louisville, KY 40211.

Dr. Clinton Ray Potts passed away peacefully on February 16, 2022 at the age of 96. Ray was born January 1, 1926 in Burkburnett, Texas to Cecil Ray Potts and Grace Crowder Potts. He is preceded in death by his parents, his brother Glendon, and... View Obituary & Service Information

The family of Dr. Clinton Ray Potts created this Life Tributes page to make it easy to share your memories.