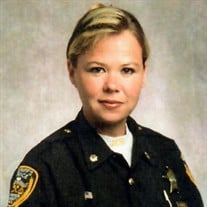 Christine “Chrissy” Marie Leffler Hancock, 52, Jefferson County Sheriff’s Office Director of Joint Task Forces, passed away September 25, 2021 after waging a courageous battle with Triple Negative Metaplastic breast cancer for over two years. Chris was not afraid of her cancer and with the support of her Doctors in Louisville, traveled to Houston for treatment with experimental drugs. In her battle with cancer she was an inspiration to all who were around her for her positive attitude and willingness to try whatever was suggested by her Doctors. Chris was born in Louisville, KY and graduated from Seneca High School, Class of 1987. Chris served in the Jefferson County Sheriff’s Office for thirty one (31) years, joining in 1990 as a dispatcher, becoming a deputy sheriff, and as her tenure grew was promoted to Sergeant, Lieutenant, Captain and then Major. During this period she served in various units in the office and at different times served as Commanding Officer of Administration, Operations and the Interdiction Units retiring as a Major. After a short period she was hired back in the Sheriff’s Office as Director of all Joint Task Forces. Chris loved the Sheriff’s Office and those who worked for her, loved Chris. “She was an avid Alabama fan and on ocassion was known to have a Bud Light” Chris was a strong advocate for professional training for not only commanding officers but also the deputies and detectives in her units. In 1999, she applied for and was accepted to attend the prestigious FBI National Academy in Quantico, Virginia graduating in Session 198. Chris also realized the value of attending law enforcement training conferences and in joining Law Enforcement Associations and being an active participant. She was a participating member of the Kentucky Sheriff’s Association, the National Sheriff’s Association (serving on the NSA Drug Committee) and the Kentucky Narcotics Officers Association. She was also a proud member of the Jefferson County Deputy Sheriff’s Fraternal Order of Police Lodge 25. Director Chris Hancock was a role model for all women in Law Enforcement. She believed if you were willing to train, treat everyone with respect and dignity, listen to leaders you trust and mentor your subordinates. there was nothing you could not do or achieve. She is survived by her beloved son, Lawrence Paul Hancock, adored father, Stephen Leffler Sr. (Nan), her brother, Stephen Leffler Jr., two step sisters, two nieces and three nephews. Also dearest ·best friends Janice Mudd Grinestaff, Sandy & Bill Haynes, the Hancock/Kramer Families, Jennifer Washle and the “Hancock Handlers” Visitation will be at Pearson’s 149 Breckenridge Lane on Thursday, September 30, 2021, 2 - 7 PM with FOP Service at 6 PM . Funeral Service will be at noon, Friday, October 1, 2021 with visitation from 10 AM - noon. Memorials may be made to Kentucky Sheriff's Association Boys & Girls Ranch, P. 0. Box 57, Gilbertsville, KY. 42044 Pearson's "Where Louisville Goes To Remember".

The family of Christine "Chrissy" Marie Leffler Hancock created this Life Tributes page to make it easy to share your memories.

Send flowers to the Hancock family.