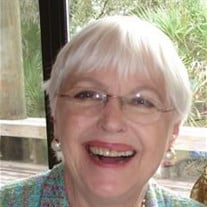 Charlotte B. Everbach, 88, of Winter Park, FL, died peacefully on Thursday, June 6. She was a native of Talbotton, GA. After graduating from Wesleyan College (BA, Art History) in Macon, GA, Charlotte enrolled in graduate studies at New York University and the University of Southern California. She moved to Louisville for a position as one of the first female television producers. There, she met Louisville native Jack Everbach. They married in 1956 and soon moved to Florida with their infant daughter Geri. By 1962 they had settled in Central Florida, where Charlotte began rigorous study toward membership in the American Society of Interior Designers (ASID) and Jack pursued a career in radio broadcasting. Charlotte’s love for people and the arts led her to a life of community service. She was a founding trustee and tireless supporter for Atlantic Center of the Arts in New Smyrna Beach, FL and was active with numerous arts organizations in the Orlando area for many years. Charlotte was named Outstanding Woman of the Year in the Arts in 1981. In 2009, Atlantic Center celebrated her exceptional service with its Spirit Enrichment Award. Charlotte’s beloved alma mater, Wesleyan College, honored her with a Distinguished Service to the Community award in 2012. She also served on the church vestry and a variety of committees at the Church of the Good Shepherd in Maitland, FL. Always the quintessential “people person”, Charlotte was treasured by her family and many friends. She frequently remarked how thankful she was for her fabulous life - filled with family, friends, art, travel and service. Her positive spirit was legendary. Charlotte is survived by her daughter Geri Rybacki, son-in-law Peter Rybacki, grandchildren John Rybacki and Kendall Rybacki and great grandchildren Blake Rybacki and Isabella Crittendon. She will be laid to rest beside her husband Jack at Cave Hill Cemetery. Funeral service 12pm Thursday, June 20th, at Pearson’s, 149 Brecken- ridge Lane, with burial to follow at Cave Hill Cemetery. Visitation 11am until time of service. A Celebration of Charlotte’s Life will be planned by family and friends for a later date in Florida. In lieu of flowers, Charlotte’s legacy can be honored through gifts to Atlantic Center for the Arts, 1414 Art Center Avenue, New Smyrna Beach, FL 32168 or online at atlanticcenterforthearts.org ; or to Wesleyan College, 4760 Forsyth Rd, Macon, GA 31210.

The family of Charlotte Battle Everbach created this Life Tributes page to make it easy to share your memories.

Send flowers to the Everbach family.