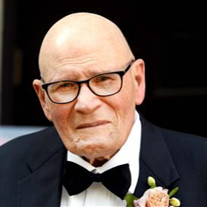 Charles C. Smith, Jr., MD 89, died Sunday March 8, 2020 He was born in Fonde, KY to Charles C. Smith Sr & Clytie Smith. He was a graduate of Middlesboro High School, Georgetown College and University of Louisville School of Medicine. He completed a Rotating Internship at University Hospital Birmingham, AL and a residency in Internal Medicine at University of Louisville where he served as Chief Resident in 1960. He served in the U.S. Air Force as a base flight surgeon from 1956-1958. He dedicated 50 years of his life to the practice of Internal Medicine, where he was known as the "Doctor's Doctor". His entire career, he volunteered his time as a Clinical Instructor in Internal Medicine at the University of Louisville. He received a Doctor of Laws, Honoris Causa from Georgetown College in 1987. He was a devoted member at Christ Church United Methodist and also a member of Big Spring Country Club. He served as President of the Jefferson County Medical Society, President of the Kentucky Medical Association, Governor of the American College of Physicians, and Councilor from KY for the Southern Medical Association. He was a founding member of the initial Board of Directors of Anthem where he was a Vice Chairman and member of the Executive Committee. After retirement, he continued his education at the Presbyterian Theological Seminary, monitoring many classes. He also traveled extensively with his wife Rosemary around the world. He continued his life of service to the community by participating in the Historic Preservation of Marine Hospital as a National landmark in Portland. He was also passionate in his support of Henderson Settlement located in his beloved Eastern KY. He was preceded in death by the love of his life and his wife of 57 years, Rosemary Sledge Smith. He is survived by his sons, Charles C. Smith III MD (Lynn), New Orleans, LA, and Mark G. Smith MD (Terry); daughters, Stephanie Altobellis, MD (Thomas Dunbar) and Cindy Franzen (David) Franklin, TN; Brother, James Smith, MD (Gail)Dallas TX and Sister-In-Law Norma Sledge; grandchildren Clay Smith (Katy), Drew Smith (Liz), Kathryn Korengold (Will), Abby and Nolan Smith, Vincent and Salvatore Altobellis; and great grandchildren Morgan and Grace Smith. Funeral Service will be at 1pm Saturday March 14 Christ Church United Methodist, 4614 Brownsboro Road with private burial to follow at Resthaven Memorial Park. Visitation 4-7 pm Friday March 13 at Pearson's 149 Breckenridge Lane. Memorials to Henderson Settlement, PO Box 205, Frakes, KY 40940 or charity of your choice.

The family of Dr. Charles C. Smith Jr. MD created this Life Tributes page to make it easy to share your memories.

Send flowers to the Smith family.