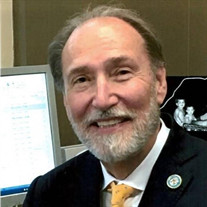 David was called home to heaven during the early evening of March 12th, 2021. He left us the way he always wanted to; at the home he and his wife built together in 1983 with his family and dog, George Bailey, at his side. David was a husband,... View Obituary & Service Information

The family of Charles David Phelps created this Life Tributes page to make it easy to share your memories.

David was called home to heaven during the early evening of March...

Send flowers to the Phelps family.