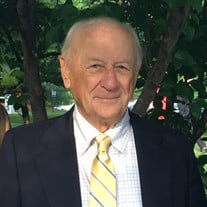 Charles I. McCarty passed away at the age of 91 on January 10, 2022 at his home in Gulf Stream, FL. Mr. McCarty was born in Bardstown, KY on June 30, 1930 to Charles L. McCarty and Della Grigsby McCarty. He graduated from the University of Louisville School of Business and the Harvard Business School’s Advanced Management Program. Mr. McCarty served in the U.S. Army during the Korean War. While at the University of Louisville, Mr. McCarty met the love of his life, Ann Watson Currin. After graduating, he and Ann married in 1955. They remained married for 66 years, until her passing in April 2021. He retired as Chairman and Chief Executive Officer of BATUS, Inc. which had holdings in Brown & Williamson Tobacco Corporation, Saks Fifth Avenue, Gimbels, Marshall Field’s, Kohl’s, and Appleton Paper Company. Mr. McCarty served on the Board of Trustees of the University of Louisville and chaired the Board from 1988 to 1990. He was Chairman of the Louisville Waterfront Development Corporation Board from 1990 to 2003. Other civic boards he served on included The Kentucky Derby Museum, Actors Theatre, Louisville Community Foundation and Kentucky Country Day School. He also was a board member of several corporations. These included First Kentucky National Corporation, Glenmore Distilleries, Louisville Cement Company, Commonwealth Bank and Trust Company and Soltech, Inc. Mr. McCarty was a member of The Louisville Country Club and The River Valley Club. Other club memberships included The Gulf Stream Golf Club as well as The Little Club in Gulf Stream, FL. He is survived by his daughter, Pamela McCarty Paroli (Tony), son, Madison Currin McCarty (Jane Beth), five grandsons, Madison Currin McCarty, Jr. (Brooke), Christopher John Paroli (Ellen), Charles Parker McCarty (Genevieve), Robert William Paroli and John Hendricks McCarty, and one great grandson, Madison Currin McCarty III. Arrangements under the direction of Pearson's, "Where Louisville Goes To Remember." The funeral is private. In lieu of flowers, donations may be made to Waterfront Park, 129 River Road, Louisville, KY 40202, www.ourwaterfront.org.

Charles I. McCarty passed away at the age of 91 on January 10, 2022 at his home in Gulf Stream, FL. Mr. McCarty was born in Bardstown, KY on June 30, 1930 to Charles L. McCarty and Della Grigsby McCarty. He graduated from the University of Louisville... View Obituary & Service Information

The family of Charles I. McCarty created this Life Tributes page to make it easy to share your memories.

Send flowers to the McCarty family.