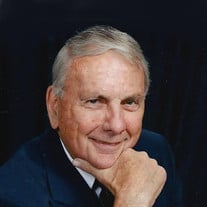 Charles "Cecil" Iglehart Jr., 83, passed May 31 after a brief battle with cancer. His life started June 19, 1935 in Owensboro, KY as the proud son of Susie Luvenia Whitmer and Charles Cecil Iglehart Sr. After graduating from Owensboro Senior High School Cecil joined the Navy as a Seabee. Upon his return back home from serving his country, he earned his undergraduate degree from the University of Louisville's J.B. Speed School of Engineering. He graduated in 1961 with a Bachelor’s in Civil Engineering. While attending UofL he married the love of his life, Carol Sue Mischel. After graduation in 1961, Cecil started his career with the State Department and quickly became Director of the Engineering department. During his tenure with the State Department, Cecil decided to further his education. He attended the University of North Carolina at Chapel Hill in 1964, earning a Masters of Science in Sanitary Engineering. Cecil is a member of the American Society of Civil Engineers. Cecil and Susie moved to Louisville in the late sixties working for Waste Management and retiring after 25 years. They joined the St Margaret Mary community. During this time, Cecil went through the process to become a Spiritual Director, through the Archdiocese of Louisville. Cecil also worked tirelessly with the St Vincent DePaul organization assisting those in need. Cecil is survived by his wife of 63 exciting years, Carol "Susie" Mischel Iglehart. His son David and his wife Melissa and daughter Anne Mischell and her husband Albert Wohlleb. Cecil celebrated life with his grandchildren Kyle, Brooke, Audrey, Lauren, Jane, Joseph and Cecilia and great great-grandchildren Ella, Max, Lucas, Paul, Noah, Tyler and Lily. Funeral Mass 10:30 am Monday at St. Margaret Mary Catholic Church, 7813 Shelbyville Road. Visitation 9 am Monday until time of service at church Memorial gifts: St. Margaret Mary’s Church or you favorite Charity.

The family of Charles Cecil Igelhart created this Life Tributes page to make it easy to share your memories.

Send flowers to the Igelhart family.