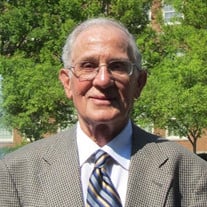 Charles Ray Arrington “Chick”, age 89, of Louisville, Kentucky died on January 18, 2020 with his family by his side. Chick was born in Wallins Creek, Kentucky to the late Jane and Arthur Arrington. He is proceeded in death by his brothers, Robert H. and Jack Arrington; sister, Martha Wood; daughter, Teresa Arrington Manecke, and great-granddauther, Anna Catherine Chiles. He is survived by his wife of 69 years, Edna D. Arrington; daughter, Lori Siefke (John); grandchildren, Talbott Manecke (Stephanie), Alexandra Chiles (Anthony), Zachary Siefke, and Sam Siefke; great-granchildren, Mylah Manecke, Faryn Manecke, and Charles “Charlie” Chiles, and dear friend, Alyson Scharf. Chick was on of the best basketball players to come out of Eastern Kentucky. He loved the game of basketball, and enjoyed cheering on the Kentucky Wildcats. Some of Chick’s favorite pastimes included: playing golf, playing cards, driving his grandkids to and from school, and attending the sporting events of his grandchildren. Chick retired from Fischer’s Packing Company where he was one of the top salesmen. He enjoyed staying in in touch with his co-workers from there after his retirement. Many of Chick’s fondest memories were attending family functions with the Arringtons, the Neals, the Blantons, the Knuckles, the Dolans, and the Woods. He will be remembered as a loving and giving individual by all who knew him. Funeral Service will be held at 12pm on Friday, February 7, 2020 at Pearson’s, 149 Breckenridge Ln. with burial to follow at Calvary Cemetery. Visitation will be from 10am until the time of the service at noon. Memorial gifts may be made to the Juvenile Diabetes Research Foundation of Kentucky (11902 Brinley Ave. #100 Louisville, Kentucky 40243)

Charles Ray Arrington &#8220;Chick&#8221;, age 89, of Louisville, Kentucky died on January 18, 2020 with his family by his side. Chick was born in Wallins Creek, Kentucky to the late Jane and Arthur Arrington. He is proceeded in death by his... View Obituary & Service Information

The family of Charles Ray Arrington created this Life Tributes page to make it easy to share your memories.

Send flowers to the Arrington family.