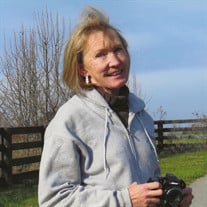 Cathy Tanian Reagan, born April 29, 1954, to Frances Reagan and Robert J. Reagan, passed away on September 1, 2021. From a young age, Cathy had a strong love of the environment, the outdoors, and animals, particularly horses. Cathy could almost always be found outdoors. When she was a child, Cathy would wander off to her neighbor’s farm, climb up on the fence, and watch the horses playing in the field. Shortly thereafter, Frances encouraged her daughter’s love of horses by enrolling her in riding lessons. Cathy went on to attend Waggener High School and college in Florida, where she intended to study veterinarian science, but was told that women could not be vets and that she would be taking a job from a man. Cathy instead taught herself everything there was to know about horses and equestrianism and dedicated her life to teaching the same to others. She began teaching on a large ranch in northern California. Eventually, she returned home to Kentucky and began working at Spring Run Farm. At Spring Run, Cathy imparted her knowledge of horses on a countless number of people, some of whom became lifelong friends. Over the years, many of Cathy’s pupils became accomplished equestrians (e.g. her niece), but even those who didn’t (e.g. her nephews) were left with fond memories and a greater appreciation for horses and the natural world because of Cathy. In later years, she was a devoted caretaker to her mother, Frances Reagan; a loving sister, aunt, and great aunt; a doting dog owner; and a dear friend to many, including her second family at Spring Run Farm. Cathy was predeceased by her father Robert James Reagan, Jr. and her sister, Laura Coleman Sigmon Reagan. She leaves behind her mother, Frances Reagan; her brother, Scott Reagan; her cherished friend, Charlie Huff; her nieces and nephews, Emery Reagan, Robert Reagan, and Cole Sigmon (Lauren); numerous loving cousins; many devoted friends; and her beloved dog, Siva. Cathy’s final resting place will be next to her sister, Laura, in Cave Hill Cemetery. In light of the ongoing Covid-19 pandemic, all services were private. In lieu of flowers, donations can be made in Cathy’s name to the Equine Land Conservation Resource (https://elcr.org/donate) or Old Friends (https://www.oldfriendsequine.org/how-to-help.html).

Cathy Tanian Reagan, born April 29, 1954, to Frances Reagan and Robert J. Reagan, passed away on September 1, 2021. From a young age, Cathy had a strong love of the environment, the outdoors, and animals, particularly horses. Cathy could almost... View Obituary & Service Information

The family of Cathy Tanian Reagan created this Life Tributes page to make it easy to share your memories.

Send flowers to the Reagan family.