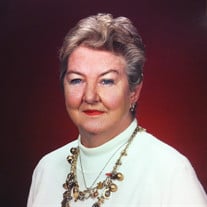 Caroline Shelburne Crone Cronan, 84, died peacefully at Hosparus Inpatient Care at Norton Pavilion on February 14, 2019. She had been living at Signature Healthcare at Jefferson Manor and previously resided at Charlemont Farm in Simpsonville. Born in Cincinnati, Ohio to Robert F. Crone and Gay Armistead Crone, Mrs. Cronan moved to Louisville as a young child. She was a 1952 graduate of Sacred Heart Academy and a survivor of the polio epidemic of 1954. She married Walter Wood in 1956 and lived in Crescent Hill as a wife and mother for much of the next three decades. Her long-time support of the Louisville Democratic Party took her from early stints as a pollworker and precinct captain to running for 1st Ward Alderman against future Mayor William Stansbury in the mid-1970s. Though she didn’t achieve elected office, her decades of work campaigning and fundraising for the Party brought her countless friends and full-time employment, most notably for Jefferson County Sheriff Jim Greene, where she retired from a 25+ year tenure as Director of Personnel in 1989. In 1984 she married Charles J. Cronan, III (C.J.) and moved to a 250-acre farm in Shelby County, two things she swore she would never do (“Marry a Republican?! Live on a Farm .. in the Country!?”) but embraced and loved for the rest of her life. She and C.J. loved a party and lived to entertain, and their hospitality was enjoyed by local foxhunters, beaglers, or anyone else in need of good company and a cold beverage at 5 o’clock. She was a maximalist before that word was cool and her homes reflected a life chockfull of creative work in needlepoint, decoupage, landscape painting, gardening, sewing and interior design. She loved china by the set, bling by the armload, Lincoln Town Cars and her signature long, painted and decorated fingernails. She is preceded in death by her son, W. Wyville Wood, Jr., her first husband of 27 years, Walter W. Wood, her second husband of 27 years, Charles J. Cronan, III, and her brother, Robert F. Crone, Jr. She is survived by her daughter, Victoria Armistead Wood, step-son, Charles J. Cronan, IV (Mary Anne); stepdaughters Mary Opel (Jim), Sally McLaughlin; grandchildren Brackston Wood, Laura Kathleen Wood, Michael Cronan (Karen), Geoffrey Cronan (Stephanie), Jason Cronan (Adrienne), Sarah Cronan Spurlock (Trent); and niece and nephew Dawn M. Crone and Robert F. Crone, III (Karen). Moreover, she is survived by Robert Woodson, her virtual son, BFF and cherished companion who is treasured by the Cronan/Crone/Wood families and will be remembered and celebrated for his four decades of care, loving kindness and humor. In lieu of flowers, gifts can be made to Hosparus. A memorial service will be held Wednesday, April 10 at 1:30pm at St. Mark’s Episcopal Church immediately followed by internment in the Church memorial garden.

The family of Caroline Shelburne Crone Cronan created this Life Tributes page to make it easy to share your memories.

Send flowers to the Cronan family.