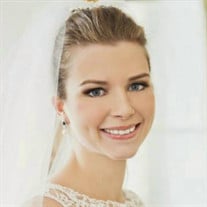 Carol Lee Darwin, 34, beloved daughter, mother, and wife, died suddenly at home on December 21, 2021. Carol was a beautiful and devoted wife to her husband, Robert Darwin, an incredible, playful, loving mother, and the brightest light of her parent’s lives, Laura and Sam Pollock, and Robert Belcher. Carol was born on July 7, 1987, in Jeffersonville, Indiana. After graduating from Sacred Heart Academy in 2005, Carol pursued her education at Indiana University Southeast graduating with a double major in International Studies – Asian Studies and Political Science in 2009, with her senior thesis being published in the Indiana University Undergraduate Journal. Living in a medical family, Carol realized her truest potential was in nursing. She graduated from the Bellarmine University Accelerated BSN program in 2013. Carol decided to further her knowledge to Nurse Practitioner, graduating from South University with a MS in Adult-Gerontology Primary Care with a 4.0 GPA and Summa Cum Laude in 2015. Carol was inducted into the Honor Society of Nursing, Sigma Theta Tau International, Beta Epsilon Chapter. Being an ambitious student, Carol continued on to acquire her post-graduate certificate in Adult-Gerontology Nurse Practitioner-Acute Care Nursing from Duke University School of Nursing, with Honors, in 2018. Carol was dual certified as an Adult-Gerontology Primary Care and Acute Care Nurse Practitioner and a Certified Emergency Nurse. Determined as always in her pursuit of higher education, Carol was to graduate this coming Spring from Duke University’s Doctorate of Nursing program with a 3.98 GPA. She was most proud of this educational accomplishment. Carol was employed by Louisville Emergency Medical Associates and most recently practiced as the director of the APRNs and PAs in the Observation Unit at Baptist Health Louisville. Previously she worked for University of Kentucky Critical Care. Carol was an adjunct instructor at Galen Nursing School and an NCLEX instructor for Kaplan. Prior to earning her MSN, she worked as an RN in the Pediatric ICU at Norton Children’s and in the Surgery Department of Baptist Health Louisville. Carol was a highly respected professional in her field. She received the 2021 American Association of Nurse Practioners’ State Award for Excellence Kentucky Nurse Practitioner Advocate of the Year. This award is given to individuals who have made a significant contribution toward increasing awareness and recognition of nurse practitioners. In November 2021, Carol was selected as a participant in Governor Andy Beshear’s proclamation presentation to make November 7 to 13, Nurse Practitioner Week. In addition, Carol served as president-elect of the Kentucky Association of Nurse Practitioners and Nurse Midwives and was an APRN council member of the Kentucky Board of Nursing, as appointed by the Governor. Carol was also a member of the Foundation for a Healthy Kentucky - Health Equity workgroup and an active participant in the Equity Learning Cohort and council member of the Foundation’s Diversity Equity and Inclusion Committee. She was recently appointed to the Leadership Committee of the Foundation for a Healthy KY Community Advisory Council. Duke University chose Carol to represent the Duke University School of Nursing as a member of the Duke Health Center for Inter-Professional Education and Care panel. This year Carol received the highest civilian honor which the Kentucky Governor can bestow, the title of Kentucky Colonel. In addition to her professional recognitions, Carol was crowned the 2013 Miss Kentucky International. Carol was previously a model and actress prior to her professional career. Above all her many accomplishments, Carol treasured her beautiful family. She was deeply connected to her best friend, husband and soul mate, Robert. Together they had their sweet children, Carter and Luna, whom she absolutely adored. Carol was such a loving mother, intent on teaching kindness, tolerance, and patience, all bundled up with fun. Her unlimited love for her family knew no bounds. It amazes us still, how Carol could balance all that she pursued, while being the kind, passionate, hilariously witty, engaging, generous soul she was. Not a day would go by without talking about any little thing to her parents who cherished her. A dynamic altruistic person with hundreds of friendships, Carol helped anyone in need. Carol was a prolific reader of literature, passing this passion on to her children. She enjoyed the fun things in life with her friends and family, movies, backyard gardening, Sailor Moon, cooking, crafts, anime, electronic dance music, camping, her dogs, holiday décor, playing pokemon and video games with her kids and all those shoes and purses! Carol will be greatly missed by all who loved her. Her memory will live in our hearts forever. Carol is survived by her husband, Robert Darwin, son Carter, and daughter Luna, her parents, Laura and Sam Pollock, and Robert Belcher, along with siblings, Courtney McCarty (Justin), Evan Belcher (Jeni), Robert Pollock (Nikki) and Ian Pollock. She is preceded in death by her maternal grandparents, Barbara Carter and John Olson and Donald and Betty Swann Belcher. Visitation will be held on December 29, 2021 from 1:00 pm until 7:00 pm at Pearson's Funeral Home, 149 Breckenridge Lane in St. Matthews, with a Nightingale Tribute for nurses at 6:30 pm. Mask are required to attend visitation and services. A candlelight memorial service will be held at Pearson's on Thursday, December 30, 2021, at 6:00 pm. To those not able to attend the Candlelight Memorial Service;https://zoom.us/j/4933233553?pwd=WWpjb1I4MVZVN096QytMbXR5RlpNZz09 In lieu of flowers, donations can be made to the Carol Lee Darwin Memorial Scholarship Fund. The link is http://www.kanpnm.org/caroldarwinfund/ Arrangements under the direction of Pearson's, "Where Louisville Goes to Remember".

Carol Lee Darwin, 34, beloved daughter, mother, and wife, died suddenly at home on December 21, 2021. Carol was a beautiful and devoted wife to her husband, Robert Darwin, an incredible, playful, loving mother, and the brightest light of her... View Obituary & Service Information

The family of Carol Lee Darwin created this Life Tributes page to make it easy to share your memories.

Send flowers to the Darwin family.