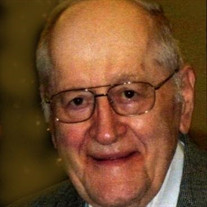 Carl A. Neumayer, Jr, 91, of Louisville passed away Friday, October 18 surrounded by his loving wife Phyllis and family at home. He was born in Chicago, Illinois on April 11, 1928 to Carl Neumayer, Sr and Frances Neumayer (Smetana). He grew up on the north side of Chicago and attended Lane Tech High School. He attended Purdue University and received his Bachelors Degree (BS) in Civil Engineering. In 1948, he met Phyllis Schoenfeld and they married in 1950. After college he returned to Chicago and worked in several jobs as an Engineer before joining the Army Corp of Engineers in 1950 where he was a Corporal instructor until 1952. From 1952 until 1965 he worked as a waterworks design Engineer in Kansas City. While working he obtained a law degree (JD) from the University of Missouri in 1958. He first arrived in Louisville in 1965 working for the Metropolitan Sewer District until 1974. Then moved to Arlington Heights, Illinois working in senior administrative engineering roles in the Chicago area. He returned to Louisville for good in 1980 as Director of Operations for MSD until retirement in 1999. Carl was lifetime member of the Water Environment Federation, American Society of Civil Engineers, Instrumentation Testing Association and the Purdue Alumni Association. He was also a Registered Professional Engineer and Land Surveyor, a Licensed Attorney and Kentucky Colonel. He and Phyllis enjoyed a life long bond with their special bridge club friends of over 25 years. He had a love of genealogy and travel. He extensively researched his family history traveling many times to Austria and the Czech Republic searching out and finding his distant relatives. He and Phyllis enjoyed many travels within the US for work and Europe on many trips with family and grandchildren. His unique talent in woodworking and his craftsmanship produced many beautiful pieces as a hobby late in retirement. And, not to be forgotten, his wit and knowledge of life shared with his children and grandchildren, a commanding view of right and wrong. His shoes will be big ones to fill. He is survived by his wife of 69 years, Phyllis, children Scott (Joanie), Brian (Teri) and Jane (Rob), 7 grandchildren, Elliott, Eric, Andy, Maggie, Erica, Katherine and Aaron and 2 great grandchildren, Collin and Rylie . His oldest daughter, Susan, preceded him in death. Visitation will be Monday, October 28 from 4pm to 7pm at Pearson’s, 149 Breckenridge Lane. Services will be Tuesday October 29 at St. John’s Lutheran Church at 1pm with the burial following at Cave Hill Cemetery. In lieu of flowers memorials may be sent to The Saint Matthews Area Ministries or the American Macular Degeneration Foundation (AMDF

Carl A. Neumayer, Jr, 91, of Louisville passed away Friday, October 18 surrounded by his loving wife Phyllis and family at home. He was born in Chicago, Illinois on April 11, 1928 to Carl Neumayer, Sr and Frances Neumayer (Smetana). He grew... View Obituary & Service Information

The family of Carl A. Neumayer Jr. created this Life Tributes page to make it easy to share your memories.

Carl A. Neumayer, Jr, 91, of Louisville passed away Friday, October...

Send flowers to the Neumayer family.