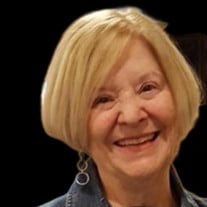 Brenda Louise Hale of Louisville, 77, passed away April 16, 2022, after a brief but courageous fight against pancreatic cancer. She was a retired Registered Nurse, active and doting grandmother, avid tennis player, and a former member of P.E.O.... View Obituary & Service Information

The family of Brenda Louise Hale created this Life Tributes page to make it easy to share your memories.

Send flowers to the Hale family.