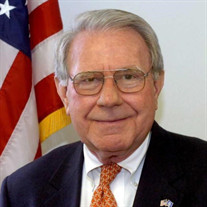 Bobby Miller DeWeese, M.D., age 86, passed away peacefully on Wednesday, November 25, 2020. He was a person of great ability as evidenced in his two highly successful careers, but he never changed the basic values he learned as a youngster... View Obituary & Service Information

The family of Dr. Bobby Miller DeWeese MD created this Life Tributes page to make it easy to share your memories.

Send flowers to the DeWeese family.