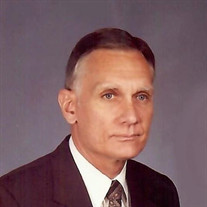 Billy J. Norsworthy, age 88, died on Wednesday, May 12, 2021 at his home in Louisville, KY. Billy was born near Wichita Falls, Texas on August 3, 1932. His parents moved the family to Mayfield, KY in Graves County in 1939 to escape the infamous Dust Bowl of the 1930’s. Billy entered Sedalia Elementary School in Graves County and graduated from high school there in 1950. He met Margaret Dobson in school and they became friends, dated and married. They were married sixty plus years. Out of high school Billy was employed by F.H. McGraw and Company, a construction company and worked there until he was drafted into the U.S. Army in June 1953. He received basic training at Fort Knox and was immediately assigned to a unit in South Korea. It was during that time that his only child, Joe Ben was born in Murray, KY. After his honorable discharge from military service, Billy entered Murray State University and earned a BA degree. He was subsequently employed by Kentucky Farm Bureau Insurance Company where he had a long and successful career. After retirement Billy worked as a volunteer at Baptist Hospital East for several years. Billy is survived by his wife Margaret; son, Joe Ben; grandchildren, Kerri and Marcie. His is also survived by his siblings, Richard, Don, Linda and Lisa. He was predeceased by his parents, Ralph F. Norsworthy and Inez Clynch Norsworthy; brother, Jimmy R. Norsworthy and grandsons, Travis D. Norsworthy and Joshua D. Norsworthy; daughter-in-law, Karen L. Norsworthy. Funeral service will be held at 2 p.m. on Wednesday, May 19, 2021 at Pearson’s, 149 Breckenridge Lane. Visitation will be from 12 noon until time of service. Memorial gifts may be sent to the Louisville Library Foundation.

Billy J. Norsworthy, age 88, died on Wednesday, May 12, 2021 at his home in Louisville, KY. Billy was born near Wichita Falls, Texas on August 3, 1932. His parents moved the family to Mayfield, KY in Graves County in 1939 to escape the infamous... View Obituary & Service Information

The family of Billy J. Norsworthy created this Life Tributes page to make it easy to share your memories.

Send flowers to the Norsworthy family.