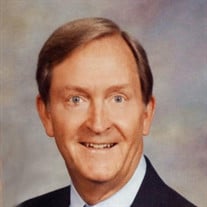 Bill W. Mathis, 85, of Louisville passed away at home from natural causes. Bill was born in Skipperville, Dale County, Alabama, to Lenson Mathis and Mattie Lou Parmer Mathis of Alabama. He was married to the love of his life, May Ann MacDonald Mathis, for 50 years before she passed in May of 2018. They raised their family in Louisville. Daughters Katherine Mathis (Oliver Foote) of Scotland and Sharon Satterly (Eric), granddaughter Elizabeth Satterly, and grandsons Abenet Satterly and Owen Mathis-Foote survive them. Bill also leaves behind brother Norman Mathis, sister Cecelia Mulliford (Jack), sisters-in-law Kathy MacDonald and Cathie Raymond (Bill), and numerous nieces and nephews. Bill graduated from Dale County High School (class president), Howard College (later renamed Samford University) with a degree in psychology-sociology-English, Southern Baptist Theological Seminary with a Master of Divinity, and University of Louisville with an MBA. He spent most of his adult life in Louisville but also resided in New York, NY; Winter Park, FL; and Ft. Worth, TX. He and May Ann ultimately retired to Louisville. Bill was a pioneer and thought leader in healthcare information technology. He gained an interest in computer technology in the 1960s working for Honeywell. Then as an employee of Baptist Hospitals Inc. he dreamed of sharing information to improve patient care and created an information services group named Health Data Network where he was President. The building he built on Kresge Way continues to provide healthcare information services to this day. He envisioned and led the networking of seven hospitals in Kentucky into one information system that served 2,000 beds. As a respected information technology executive, he later became the Vice President/CIO of Orlando Regional Medical Center and linked their four separate hospitals into one comprehensive computer network. He was published in journals and magazines such as US Healthcare, Computers in Healthcare, Computerworld, and Healthcare Computing and Communications. His extensive knowledge and practical experience coupled with his drive to be productive kept him from a normal retirement and led to him consulting in both healthcare and technology projects across the United States and Canada. Bill was an active member of Hurstbourne Baptist Church, and more recently Second Presbyterian Church. Anchored in his Christian faith he served as a deacon, Sunday School teacher, guest preacher, and volunteered on many committees. As a parent and grandfather, Bill took great pleasure in his role as a teacher, especially instilling a love of gardening, photography, and history. He was an advocate for higher education and valued life-long learning, mentoring and encouraging others throughout his life. He valued culture and loved the arts, especially classical music and the orchestra. He believed in hospitality and was the consummate host, always making everyone feel welcome. Bill’s private funeral and burial at Cave Hill Cemetery will be on Tuesday, May 19. Memorials to Bill may be made to Second Presbyterian Church, the Episcopal Church Home or charity of your choice.

Bill W. Mathis, 85, of Louisville passed away at home from natural causes. Bill was born in Skipperville, Dale County, Alabama, to Lenson Mathis and Mattie Lou Parmer Mathis of Alabama. He was married to the love of his life, May Ann MacDonald... View Obituary & Service Information

The family of Bill W. Mathis created this Life Tributes page to make it easy to share your memories.

Bill W. Mathis, 85, of Louisville passed away at home from natural...

Send flowers to the Mathis family.