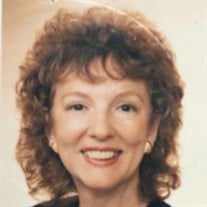 Beverly Carol McKinley Miller, 80, was born October 8, 1939 in Enid, Oklahoma and moved to Louisville at age 3. She died on July 30, 2020. She was a 1957 graduate of Ahrens Trade School and graduated 1961 from the University of Louisville School of Business. A long-time employee of Ford Motor Company’s Louisville Assembly Plant, she retired in 2007. She was proceeded in death by her mother, Margaret Houston Miller, father Chester McKinley and step-father, Henry James Miller. She is survived by brothers James Allen Miller and Marvin Leon McKinley. Beverly was a generous, feisty, funny, opinionated soul who adored dinners out, art openings, and conversations about books, movies, politics, music and in her later years, countless episodes of Lucky Dog. It is impossible to think of her without thinking of her charming home in Old Louisville, filled with artwork lovingly acquired over the years, and of her incredibly verdant and peaceful courtyard. Beverly’s love for art was matched only by her dislike for cooking—the sole thing she liked about her kitchen was the collection of photos of Robert Redford on the refrigerator door. Her ability to select the right restaurant for any occasion more than made up for that. She had a broad circle of friends of all ages and walks of life. She remained, to the end, youthful in spirit, and knowledgeable of current events. She was a fiercely devoted Old Louisville resident for nearly all of her adult life, fighting the good fight to get the neighborhood the love and recognition she felt it deserved. She leaves behind a diverse circle of friends who will miss the sound of her voice dearly. A private gathering will be held. Donations may be sent to the Fund for the Arts (623 W. Main Street, Ste LL, Louisville, Kentucky 40202).

Beverly Carol McKinley Miller, 80, was born October 8, 1939 in Enid, Oklahoma and moved to Louisville at age 3. She died on July 30, 2020. She was a 1957 graduate of Ahrens Trade School and graduated 1961 from the University of Louisville School... View Obituary & Service Information

The family of Beverly Carol Miller created this Life Tributes page to make it easy to share your memories.