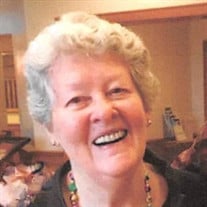 Beverly Braverman, 84 years old, died at University of Louisville Hospital on Friday, September 18. She was born in Newark, New Jersey, on May 4, 1936, to Otillia Greaves and Thomas Greaves. She is survived by her husband of 62 years, Robert Carl Braverman, and a daughter, Chris Ann Cestaro, and her husband, Arthur, of Louisville. Beverly Braverman will be forever remembered as a friend to all and for her kind and generous spirit, courage, integrity, inner beauty, creativity and enthusiasm for life. She grew up Beverly Greaves in Northern New Jersey and lived for a time in Springfield, Massachusetts. She graduated from Clifton High School in Clifton, New Jersey, where she met her future husband, Robert Braverman. She graduated from The Berkley Secretarial School, in East Orange, New Jersey, and Jefferson Community College in Louisville, Kentucky, where she received her Physical Therapy Assistant degree. She was licensed as one of the first Physical Therapy Assistants in the state of Kentucky. Her license number was 27. Beverly taught in the University of Kentucky's Physical Therapy Assistants' program at Jefferson Community College in Louisville for a number of years and practiced at Suburban Hospital until she moved to Dallas, Texas, in the late 1980's. In Dallas, she was the Vice President of Operations for Bran Management Services, Inc an international turnaround management and venture capital company. She traveled to almost 50 countries on 6 continents. Some of these same countries she visited numerous times. She had lived in fourteen houses in seven states and 11 cities. Beverly was an officer of Woman of Rotary in Dallas, Texas a Texas Master Gardener, a member of the Louisville Gardener Club and the Fifth Wheel. Beverly was a member of the Louisville Boat Club, The Park City Club of Dallas, University Clubs of Chicago and Louisville. She loved sailing and was active in the Sail and Power Squadrons of Louisville and Dallas and the Cruising Club of Louisville. She was a gourmet cook and was active in educational, civic and educational affairs She was a prodigious reader, had an abiding interest is the culinary arts, nutrition, travel and history. She was a life-long student and since returning to Louisville, a regular attendee at Bellarmine University's Veritas programs for well over 12 years. Beverly followed her family's mantra of: "Enjoy yourself, it's later than you think." A memorial service will be held at Pearson's, 149 Breckenridge Ln. on Saturday, September 26, 2020 at 12:00 p.m. with burial to follow at Cave Hill Cemetery. Visitation Friday, September 25, 2020 from 3:00 p.m. to 7:00 p.m., and from 11:00 a.m. till time of service on Saturday.

Beverly Braverman, 84 years old, died at University of Louisville Hospital on Friday, September 18. She was born in Newark, New Jersey, on May 4, 1936, to Otillia Greaves and Thomas Greaves. She is survived by her husband of 62 years, Robert... View Obituary & Service Information

The family of Beverly Braverman created this Life Tributes page to make it easy to share your memories.

Send flowers to the Braverman family.