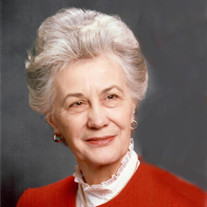 Betty Jane Terry Mills passed away peacefully on July 8, 2021. Betty Jane (BJ), daughter of Nelle and George Lambert, was born in Covington, KY on January 12, 1921. The family moved to Pleasant Ridge, OH in 1932 and Betty Jane attended Walnut Hills High School until 1935 when they moved to Bridgeport, CT. She graduated from Bassick High School. In 1942 Betty Jane graduated with a BS in Biology, Magna cum laude, from Tufts University in Medford, MA where she was a member of Chi Omega Fraternity. She was a research technician in the Department of Pathology at Yale University School of Medicine in New Haven, CT until 1943 when she transferred to the Department of Anatomy at Columbia College of Physicians and Surgeons in New York City. On April 24, 1943 Betty Jane married Ernest Alden Terry, Jr. ("Joe") who was a student at Columbia P&S and they lived in New York City until their first child was born. She then returned to Bridgeport to live there until Dr. Terry returned from Naval duty in the Pacific arena. In 1951 the family moved to Louisville, KY where Dr. Terry was Medical Director of General Electric Appliance Park. A member of the Junior League of Bridgeport and Louisville, she was involved in numerous volunteer activities including The Children's Theatre of Louisville and Recording for the Blind. After Dr. Terry's death in 1958, Betty Jane taught general science at Fern Creek High School for three years. She married David K. Mills on December 27, 1961. In 1966 she received her Master's Degree from the University of Louisville and in 1975 her Ph. D in Biology. She was awarded the Graduate Deans Citation and was a member of the Society of Sigma Xi and of Phi Kappa Phi. In 1970-1971 she taught biology at Jefferson Community College. From 1978 to 1983 Betty Jane was a research chemist at the Veterans Hospital in Louisville, KY and served as adjunct faculty with the University of Louisville Medical School from 1986 to 2001 where she retired as an Associate Professor. During this period, she was Louisville Ballet Board recording secretary for almost ten years. Betty Jane was preceded in death by her husband, David K. Mills, her sister, M. Virginia Pugsley, of Granada Hills, CA. her granddaughter, Jennifer Lynn Terry, her son, David L. Terry (Jan), and her grandson, Richard Walker Mills. Survivors include, Jonathan Terry (Mary Anne), Judith Terry Stilwell (Gene), Michael Terry (Betsy), Barbara Mills Larrain (Barry), James Mills (Cathy), Richard Mills (Kathy) and Carolyn Mills Medley (Joe). Survivors include seventeen grandchildren and twenty-four great grandchildren. A memorial service will be held at Highland Presbyterian Church on Highland Avenue in the Spring of 2022. In lieu of flowers, gifts to the Rapier Fund of Highland Presbyterian Church, the Louisville Ballet, or a charity of the donor's choice are requested. The family also wishes to express special thanks to the staff at Treyton Oak Towers for the wonderful support and care they gave for Betty Jane, and to Doris Sloan who was a trusted and compassionate caregiver for her for the last eight years

The family of Betty Jane Mills created this Life Tributes page to make it easy to share your memories.

Send flowers to the Mills family.