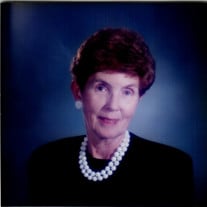 Betty Lee Ashbury Jones passed away at home on Friday evening just as the sun was setting, peacefully and painlessly, surrounded by her husband, children and grandchildren, her youngest grandchild holding her hand, all singing the lovely ballads she had sung to us when we were young. Gentle and generous, her beautiful, mighty, luminous spirit remained intact until the end. Betty was a teacher, lifelong learner, loving mother and grandmother, and fabulous partner to David for 65 years. She was born March 1, 1933, in Louisville and grew up in the Crescent Hill neighborhood. Her father, Prosser Lee Ashbury, was a pharmacist and her mother, Lillias Hutchins Ashbury, was a teacher of math, Latin and geography. She received a wonderful education in Louisville’s Clark Elementary and Barrett Middle schools, and as a member of the last all-girls class of the J.M. Atherton School for Girls. She graduated with honors from the University of Louisville, where she especially loved her courses in anatomy and organic chemistry. It was there she met the love of her life, David A. Jones. They married in 1954 and started a life of adventure, ever-expanding horizons, and contribution together. Betty was a woman of many passions and interests. She loved to learn, and never stopped learning. After she and David raised their five children she enrolled in Middlebury College’s rigorous foreign language immersion program, earning a Masters degree in French in 1985. She participated for decades in a French conversation group and a French-language book club in Louisville. She loved to teach. She taught in the Norfolk, Virginia public schools while David served in the Navy, and in a New Haven, Connecticut, pre-school while he studied law. Having completed her studies at Middlebury, she then taught for two decades at U of L and at Jefferson Community College while David was building Humana. She loved to read, and to turn others on to books. She loved her international work on the Humana Foundation’s Romanian Assistance Project. She loved political campaign work in her early years. She loved serving on the board of Middlebury College, where she helped conceive and create a California campus for the Vermont-based school. But more than anything she loved her family and her friends. She was an active, loving, committed partner to David, and celebrated their 65th wedding anniversary with him on July 24, 2019. Her humility belied strength of belief and spirit that touched all who knew her, and the footprints of their partnership and passion for Louisville, for education, for health and for community crisscross the city and beyond. She loved her five children and eleven grandchildren, to each of whom she passed on a love of books and of song. A deep and abiding friend, Betty shared joys and heartaches with those she knew and loved in fullest measure. She believed especially in maintaining and strengthening ties with her oldest friends. Betty’s love and generous spirit touched many lives and she will be greatly missed here and abroad. She is survived by her husband, David A. Jones; children David A. Jones, Jr. (Mary Gwen Wheeler), Susan Jones, Dan Jones (Lisa), Matt Jones (Nancy) and Carol Jones; grandchildren Nate, Becky, Sara, Logan, Daniel, Ellie, Katherine, Charlotte, Will, Isaac and Benham; sister Barbara Crenshaw; nieces Dawn Adams (Larry), Lynda Fadler (Jeff), and Betty Crenshaw; and nephews Andy Ashbury (Suzie) and Chris Ashbury. Special thanks are due to Betty’s caregivers and helpers, including Kim, Amy, Regina, Ronda and Tony. Visitation will be 4-7 PM Tuesday, August 20, at Pearson’s, 149 Breckenridge Lane. Funeral service celebrating the life of Betty Jones is private. In lieu of flowers, donations to a local charity would be appreciated. Betty was an enthusiastic supporter of the Parklands of Floyds Fork and the Louisville Public Library.

Betty Lee Ashbury Jones passed away at home on Friday evening just as the sun was setting, peacefully and painlessly, surrounded by her husband, children and grandchildren, her youngest grandchild holding her hand, all singing the lovely ballads... View Obituary & Service Information

The family of Betty Lee Ashbury Jones created this Life Tributes page to make it easy to share your memories.

Send flowers to the Jones family.