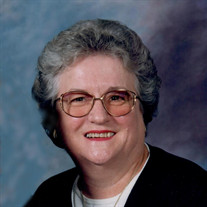 Bettie Kirkland Mattingly passed away Tuesday evening, April 28, 2020 after an 87-year life journey, with her family at her side. So appropriate it seemed, as she was at each of our sides, so very often. Charlie, her husband of nearly 65 years, will miss his “B”—a moniker he gave her many decades ago. It became such an affectionate identity that many of her family and friends came to adopt it with a heartfelt smile, as well. She was our “B”. A loving wife, mother, grandmother and great-grandmother. She was also, a wonderful daughter, sister and friend, to so many. Given the times, with a limit of nine people allowed at a service of any type, how do we pay tribute to this precious woman we luv so much? Gathering together is not an option, at least at present. Later, we will certainly gather to celebrate her with smiles and caring hugs—just as she shared with us regularly. But right now, with every ounce of luv and respect we can offer, we pay tribute to our “B” in a different way. Born in Danville, Ky in 1932, Bettie never lost touch with her early years, her family or her friends. It was there that she met and later married Charlie Mattingly, in 1955. They moved to Louisville in 1956. Together they had two children, Richard Mattingly (Carolyn, 2014), of Potomac, MD, and Barbara Middleton, of Lexington, KY. Bettie was blessed with three grandchildren, Christin Lewis (Alex), Steven Middleton and Lisa Middleton. Last year, she was also gifted a great-granddaughter, Charlotte Lewis. As a wife, she was a dream come true. A loving partner and friend. Able and ready to face whatever challenges life presented. As a mother, she was a jewel. Actively involved, nurturing and encouraging during every phase of parenting. She was a wonderful listener. So many days and nights of talking, listening and providing the guidance and reassurance that comes so naturally from a loving Mom. When she looked in your eyes, she smiled. Her smile was both beautiful and comforting. As a grandmother, those traits were only amplified. All the while she never stopped being a good daughter often driving to Danville daily to care for her Mother, Hattie Belle, as her health declined. That sweet voice of support and gentle touch was always there for those she loved. We distinctly remember those trips and how she struggled while watching her mother’s health decline. How ironic, as we came to feel the same way as a family, watching our “B” over that past decade. Bettie realized many years ago that her brain was not working correctly. She sought medical attention, over and over. The progression was slow for a while, then accelerated at times. However, much like Alzheimer’s disease, it was often unpredictable. That is when her journey began to take a different path and, very sadly, our beginning of the long goodbye. One never wants to say goodbye to someone you love. It hurts. For many of the final years, her smile was just as beautiful as ever. Her hugs were firm and joyful. But slowly she began to leave us while still looking in our eyes. Sometimes briefly, sometimes for extended periods. Discussions about grandchildren eventually turned into fragments, not even sentences, until discussions were simply no longer an option. But the love never left her heart, even when her brain would deny her voice. You could see it. Somehow, up until the end, she had ways of connecting with us. She was a woman of faith. Long ago she asked that How Great Thou Art and Amazing Grace be played at her funeral. They will be. We can’t help but draw thought…and comfort… from the Amazing Grace verse “I once was lost, but now am found.” We know that she has finally found peace again, alongside her parents, her daughter-in law Carolyn and many others that she loved and touched. There were a few prayers, those beautiful songs and another goodbye. She was laid to rest on a beautiful hillside in Cave Hill Cemetery. In reality, it will be anything but a final chapter. Her luv and memories will fuel our hearts forever. We Luv u B. We appreciate the kindness, thoughts and prayers of family and friends. We ask that any expressions of sympathy please made via donations to The Luv u Project, P. O. Box 60248, Potomac, MD 20859 or at theluvuproject.org

Bettie Kirkland Mattingly passed away Tuesday evening, April 28, 2020 after an 87-year life journey, with her family at her side. So appropriate it seemed, as she was at each of our sides, so very often. Charlie, her husband of nearly 65 years,... View Obituary & Service Information

The family of Bettie Kirkland Mattingly created this Life Tributes page to make it easy to share your memories.

Send flowers to the Mattingly family.