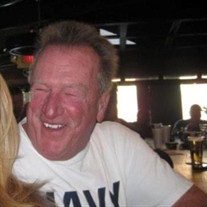 Bernard "Barry" William Siebel, Jr., passed away peacefully at home on September 14, 2021. Born in Louisville, Ky on October 1, 1946 and lived in Miami Fl and finally Brentwood Tn. His 26 year career in the music industry with BMI led him many places and gathered many long time and devoted friends. He was a rascal and a saint, though the latter was not apparent to many. Nothing was sacred with Barry and his irascible nature entertained and embarrassed at every opportunity. He was a jokester and a bon vivant of the first order. It was always easy to find his table in a restaurant or his seat at the ball field from him yelling choice phrases at the umpires. It was where the most raucous laughter and off color language emanated. He refused to help with anything that would mess up his manicured nails. Always the life of the party. He loved Jack and gingers, laying on the car horn every time he visited a friend or relative, "Barryisms" including "get the bricks out of your pocket" to the fastest girls on every team, telling short people to stand up every time he saw them, "It's not how fast you drive it's what time you leave," and "get off your knees blue, you're blowing the game" to every umpire who missed a call. He was a devoted cheerleader for his children in their many sports and travelled the country watching their games and enjoying their success. Even the opposing teams' fans loved being around Barry. His girls were the light of his life. Every article in the paper he would print and hand out to everyone in the office. The whole 5th floor of BMI was plastered with their pictures. From a former co-worker: "I have a special treasure trove of memories of your dad that will make me smile for the rest of my days. His good hair days, his bad hair days, his obsession for having a clean car, freshly starched shirts and well manicured nails, his love for Elton John music, his love for making people laugh and his love for his girls. What a special man he was, I will miss him forever." He was easily one of the most memorable employees at BMI. He impacted everyone. Barry retired from BMI in 2004 and became a volunteer softball coach at Father Ryan High School where both his daughters played. He loved softball and Father Ryan. If anyone also had the BS initials, he would be sure to remind them that he was the "Original BS." He was predeceased by his parents Bernard Sr and Sue Siebel, his brother Samuel, his sisters Susan and Sandra. He is survived by his wife Kathy, his daughters Brooke (Kyle Raines) and Holly (Kevin Self) and grandchildren Kiley, Reagan, Jamie, Jackson, and Remi, Niece Whitney Penn King (Jerry), nephew Brent Penn (Louise) nephew Ted, and his beloved dog Magic Mike "Mikey." Funeral Service will be 2:00 PM Monday September 20, 2021 at Pearson’s 149 Breckenridge Lane, with burial to follow in Calvary Cemetery. Visitation from 12:00 PM - 2:00 PM Expressions of sympathy may be made to Father Ryan Tuition assistance fund https://fatherryan.myschoolapp.com 700 Norwood Drive Nashville TN 37204 or www.japanesechinrescue.org.

Bernard "Barry" William Siebel, Jr., passed away peacefully at home on September 14, 2021. Born in Louisville, Ky on October 1, 1946 and lived in Miami Fl and finally Brentwood Tn. His 26 year career in the music industry with BMI led him many... View Obituary & Service Information

The family of Bernard "Barry" William Siebel Jr. created this Life Tributes page to make it easy to share your memories.

Send flowers to the Siebel family.