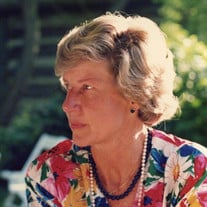 Barbara Nicholas Potts, age 88, passed away peacefully on May 13, 2020 after a courageous struggle with vascular dementia and Alzheimer’s Disease. She was born on July 10, 1931 in Louisville, Kentucky to Martha MacDonald and Philip Nicholas. She is preceded in death by her parents, her sister Martha Selden, and her brother Philip Nicholas, Jr. Barbara was a devoted and loving wife, friend, mother, grandmother, and great-grandmother—affectionately known as “Doe” to her grandchildren. As the name “Doe” suggests, Barbara was gentle, kind, selfless, and dedicated to her family. She will be greatly missed by all whose lives she touched. Barb attended Atherton High School and then the University of Louisville, where she met her future husband, Dr. Clinton Ray Potts. The couple moved from Louisville to Columbus for Ray’s residency at Ohio State. They later returned to Louisville in 1960 to build their lives with their four young daughters. Barbara had a huge heart and a passion for serving her community, and she was admired for her integrity and quiet strength. She extended acts of kindness to others as if they were her own family. She cooked meals for those in need, donated blood on a regular basis, and volunteered tirelessly in many organizations: Younger Woman’s Club, Louisville Children’s Theater, Habitat for Humanity, Episcopal Church Home, Daughters of the King, Bible Study Fellowship, St. Francis in the Fields, and her daughters’ swim teams. She was a beautiful athlete and an avid tennis player, and she enjoyed her days playing on the A teams at The Louisville Boat Club and Louisville Tennis Club. Later in life, Barbara cherished her summers hosting family and friends at their lakehouse in Wisconsin. She is survived by her adoring husband of 69 years; her four daughters: Terry Graves (Guy) of Lexington, Debby Cuttino (Jud) of Savannah, Amy Mitchell (Neil) of Louisville, and Ann Smith (Paul) of Dallas; her grandchildren: Mill Graves (Julianne), Nick Graves, Kathryn Graves, Leigh Cuttino Doorley (Jon), Judson Cuttino (Coley), Clinton Mitchell (Carolyn), Chris Mitchell, Maggie Mitchell, Alex Smith, Hannah Smith, and Leah Smith; and her great-granddaughters: Paige, Celie, Meg, Penn, Quinn, and Alice. There will be a private burial at Cave Hill Cemetery. A memorial service to celebrate Barbara’s life will be held at a later date due to the pandemic. The family would like to thank Doris Pryor, Peggy Madden, and the staff at Hosparus for their care and devotion to Barbara. As a tribute to Barbara’s legacy of service, please consider a donation to The Cabbage Patch, The Episcopal Church Home, or Habitat for Humanity.

Barbara Nicholas Potts, age 88, passed away peacefully on May 13, 2020 after a courageous struggle with vascular dementia and Alzheimer&#8217;s Disease. She was born on July 10, 1931 in Louisville, Kentucky to Martha MacDonald and Philip Nicholas.... View Obituary & Service Information

The family of Barbara Nicholas Potts created this Life Tributes page to make it easy to share your memories.

Barbara Nicholas Potts, age 88, passed away peacefully on May...

Send flowers to the Potts family.